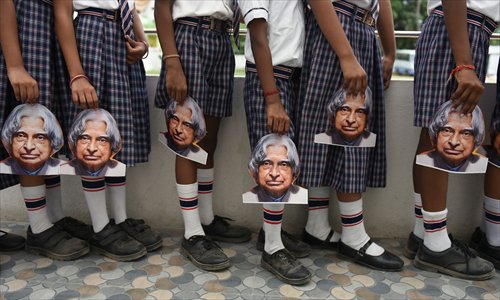 Indian schoolchildren hold masks bearing the image of former Indian president A.P.J Kalam ahead of the first anniversary of his death during a remembrance event at a school in Chennai in 2016. (File Photo: AFP)

China called on countries that have not yet joined the Treaty on the Non-Proliferation of Nuclear Weapons (NPT) to join as non-nuclear-weapon states as soon as possible, China's Foreign Ministry said in response to questions on India's application to the NPT treaty.The comment was given by Geng Shuang, spokesperson of China's Foreign Ministry at a Thursday briefing, when asked if the meeting of five nuclear weapon states talked about the possibility of India joining the NPT and Nuclear Suppliers Group (NSG). There has not been a precedent for a non-NPT country to join the Nuclear Supplier Group (NSG), so if India wants to join the NSG, it requires sufficient negotiation among NSG members and a consensus among them to reach a resolution to the issue, said Geng. The NSG was set up by a group of countries that have civil nuclear technology, equipment and material export capabilities. It aims to achieve nuclear non-proliferation by preventing civil nuclear technology and material from being used to develop nuclear weapons.Xu Guangyu, a senior consultant at the China Arms Control and Disarmament Association and a participant of open activities at the P5 Conference on Thursday, told the Global Times on Thursday that "It is impossible for China, as well as the other four recognized nuclear weapon countries in the NPT, to recognize a new nuclear weapon country, because this would cause serious nuclear proliferation and global security would be greatly damaged." Many more countries would like to become nuclear armed states if the five do not safeguard the standard and norm of joining the NPT, Xu said.Four states - India, Israel, Pakistan, and South Sudan - have never signed the NPT. India and Pakistan have publicly disclosed their nuclear weapons programs, and Israel has a long-standing policy of deliberate ambiguity with regards to its nuclear program.North Korea acceded to the treaty on  December 12, 1985, but gave notice of withdrawal from the treaty in 2003.It is very hard to resolve India's intention to join the NPT and NSG, because India has already developed nuclear weapons, so it is unlikely to make New Delhi abandon its nuclear weapons, and its neighbor Pakistan also has the same problem, Xu noted.India has been blaming China for blocking it from the NSG, but aside from China, many NSG members, including Brazil, Austria, New Zealand, Ireland and Turkey are also opposed to India's bid, citing the fact that India has not signed the NPT. The conference between five nuclear weapon states kicked off on Wednesday in Beijing.China, France, Russia, the UK and the US, as the five nuclear weapon states, expressed readiness to enhance coordination, manage differences and jointly deal with threats to international security, Geng said on Wednesday.For years, India has been trying to join the NSG, but since its foundation in 1975, all NSG members shall be NPT signatories. This has become the primary principle of the organization. China proposed in 2016 to allow non-NPT signatories to become NSG members and discuss country-specific applications.