New Zealand should offer a level playing field for Chinese companies, as its government order to ban a local operator from using Huawei's 5G technology would only hurt its industry and consumers, Chinese officials and experts said. 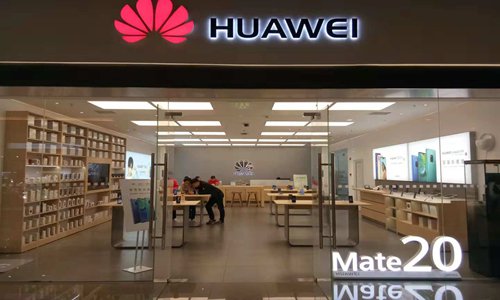 A view of a store of Huawei in Xuchang, Central China's Henan province in November. (Photo: VCG)

The comments came after New Zealand authorities on Wednesday instructed a local telecom operator not to use Huawei's 5G technology, citing national security reasons. The order indicates that Wellington is taking steps against Chinese companies on the heels of similar moves by Australia and the US. Huawei is aware of Spark's statement and is looking into the situation. And the company will actively address any concerns and work together to find a way forward, a PR representative of Huawei told the Global Times. "Huawei's 5G equipment is already being developed by major carriers around the world. Moving forward, we will continue to provide our customers with innovation, trusted and secure 5G solutions," she said. The Chinese government has always encouraged Chinese companies to undertake cooperation in overseas market by following local regulations, and China-New Zealand relations should be win-win, Geng Shuang, a spokesperson of the Ministry of Foreign Affairs, told a press briefing on Wednesday. "We hope the New Zealand government can provide a fair competition environment for Chinese companies, which would be favorable for bilateral relations," he said.Spark New Zealand, a major telecom operator in the country, said it had received an instruction from Andrew Hampton, director-general of the Government Communications Security Bureau (GCSB), that it was not allowed to use Huawei's 5G equipment as doing so would "raise significant national security risks," according to a statement on Spark's website. The company said it is "disappointed with this decision," and it has not yet reviewed the detailed reasons behind the ban.  The GCSB regulates network security under telecommunication network law in New Zealand. The intelligence agency said that "a significant network security risk was identified," relating to the installation of the 5G equipment, according to a statement on its website. Spark's head of corporate relations, Andrew Pirie, told the Global Times on Wednesday that it has had a positive relationship with Huawei for several years, as the Chinese company has provided equipment for Spark's 4G network since 2013. It was working with Huawei regarding potential collaboration on 5G for months, although contracts were yet to be signed.  Spark did not disclose the loss it would incur as a result of being forced to halt its cooperation with Huawei on 5G.   "New Zealand has taken this action just after the US reportedly asked its allies to say 'no' to Huawei equipment. It's following the US' lead on this matter, but it will only end up hurting itself," Xiang Ligang, a Beijing-based veteran industry analyst, told the Global Times on Wednesday. The US reportedly urged its allies including Germany, Italy and Japan, to avoid using equipment from Huawei due to perceived cybersecurity risks, the Wall Street Journal reported last week. As New Zealand is apparently taking aim at Chinese telecom providers, ZTE Corp, another major 5G equipment provider, will have little chance of getting into the market, Xiang noted. "So the choices left for local operators are Ericsson and Nokia, and they may face cost increases of at least 30 percent," he said. Huawei became the largest telecom equipment maker in the world in 2017 beating Ericsson, according to media reports, citing IHS Markit. The Chinese company accounted for 28 percent of the market in mobile infrastructure in 2017, followed by Nokia and ZTE, which took 23 percent and 13 percent, respectively.  However, some local residents and business representatives in the country said they felt it was urgent to catch up on cutting-edge technology, as the local telecom infrastructure cannot meet demand and needs to be upgraded. "We often have windy days, and the network is particularly vulnerable," a Chinese businesswoman living in Auckland surnamed Chen told the Global Times. "The speed is really slow compared with China," she said. Rejecting Chinese companies, which are a leading force in the 5G era, will significantly slow 5G development in New Zealand, and its own consumers and industry will bear the brunt of this decision, Xiang noted.