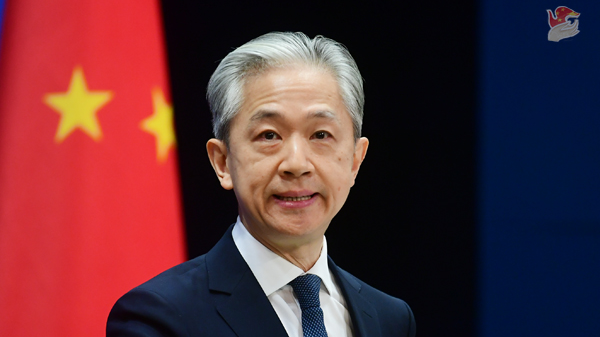 The Chinese Foreign Ministry has urged the United Kingdom to stop its political manipulation of an incident that happened outside the Chinese consulate-general in Manchester weeks ago.

Wang Wenbin, spokesperson for the Chinese Foreign Ministry, said at a regular press briefing on Thursday that China strongly urges the UK to honor its obligations under relevant international law and bilateral consular agreements and take credible measures to enable the normal performance of duty of Chinese diplomatic and consular missions in the UK.

"Otherwise, China will respond with resolute, strong and reciprocal countermeasures," he said.

According to the Chinese consulate, some anti-China elements intruded onto the consulate premises and assaulted consulate officials on October 16 in a violent, disruptive provocation.

What happened on the day?

At Thursday's briefing, Wang said the facts were "very clear", explaining that the protesters made provocations first.

"They deliberately harassed and entered illegally into China's consulate-general in Manchester and violently assaulted the consulate staff," he said.

"A protester broke into the consulate, pressed one of the staff members to the ground and choked him. He could not breathe and briefly lost consciousness," said Wang.

"Another protester who illegally entered the consulate was even wearing a professional combat glove," he added.

These illegal acts put the safety and security of the consulate's premises and personnel in serious danger, said the Chinese Foreign Ministry spokesperson.

The response from the personnel of the Chinese consulate was "proper and entirely legitimate and lawful," he said.

Wang said the UK side failed to meet its obligations under relevant international law and bilateral consular agreements.

"It did not inform the Chinese side of the protest in advance and failed to fulfill its obligation of enabling the Chinese consulate's normal performance of duty and its security," he said.

Moreover, the UK side chose to misrepresent facts and smear China and has sided with violent rioters calling for "Hong Kong independence" and wrongfully accused the relevant Chinese consulate members who were actually the victims of violent harassment and assaults, said the spokesperson.

"This is arbitrary and unscrupulous and shows no respect for justice and the rule of law," said Wang. "This is totally unacceptable to the Chinese side, and we have launched solemn representations with the UK side."

He urged the UK to take credible steps to protect the security, peace and dignity of Chinese diplomatic and consular missions in the UK.

Wang told reporters that the Chinese consul general in Manchester has completed his term of office and returned to China upon instruction not long ago.

"This is a normal rotation," said Wang. "It's for us to determine the duration of posting of members of Chinese diplomatic and consular missions."