The US should have a clear picture of the situation, stop pushing forward the so-called Hong Kong-related legislation and interfering in China's domestic affairs, said a Chinese Foreign Ministry spokesperson while commenting on US senators' push for a vote on the bill. 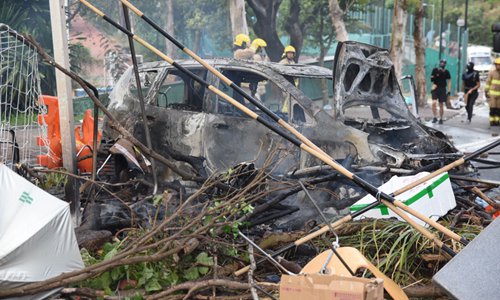 The Chinese University of Hong Kong (CUHK) is dominated by a huge fire and smoke, road barricades and fierce confrontation between rioters and police. (Photo: Global Times)

The issues facing Hong Kong are not about the so-called human rights or democracy, but it needs to bring order and end violence as soon as possible, Geng Shuang, a spokesperson of China's Foreign Ministry, said at a press briefing on Wednesday.

Geng's remarks came after US Republican Senator Jim Risch, chairman of the US Senate Foreign Relations Committee, said on Tuesday that he wanted the Senate to pass the "Hong Kong Human Rights and Democracy Act" to support riots in Hong Kong.

Geng warned that the US also has important interests in Hong Kong. Once the bill becomes law, not only China's, but US interests will be damaged. China will surely take strong measures to fight back the US wrongdoing, and defend its sovereignty.