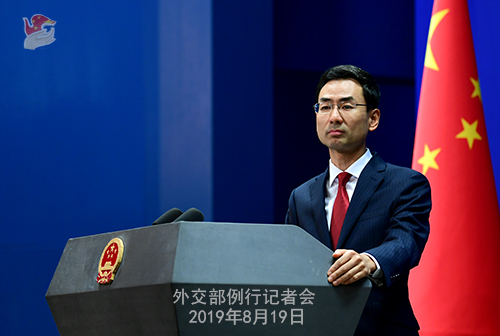 It was reported that the "conventionally configured" test missile hit the target after flying more than 500 km. That was the first time the United States carried out a missile test previously prohibited by the Intermediate-Range Nuclear Forces Treaty (INF Treaty), marking the resumption of an arms race.

Foreign Ministry spokesman Geng Shuang said the missile test was conducted less than three weeks after the United States announced its official withdrawal from the INF Treaty on Aug. 2.

"This fully showed the true purpose of the U.S. withdrawal was to seek to 'untie itself,' develop advanced missiles with a free hand, and pursue unilateral military advantages," Geng said at a press briefing.

Geng said the U.S. move will trigger a new round of arms race and the escalation of military tensions, and in turn have severe negative impacts on international and regional security situations.

"We urge the U.S. side to abandon the Cold War mentality and the outdated zero-sum game thinking, exercise restraint on armament development, earnestly safeguard the existing military control regime, and do more to preserve global strategic balance and stability as well as promote international and regional peace and tranquility," Geng added.