CHINA China urges US to halt legislation on Tibet issues

China urges US to halt legislation on Tibet issues 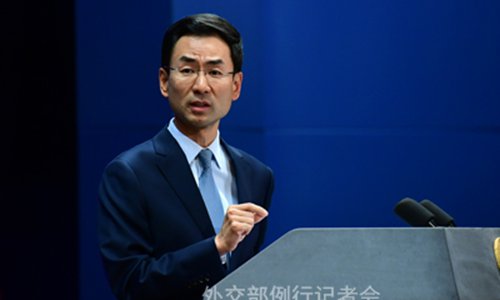 The Chinese Foreign Ministry on Thursday urged the US to stop exploiting the Tibet question as a tool to interfere in the country's internal affairs after media reported that the US House of Representatives Foreign Affairs Committee had passed a Tibet-related bill.

The passage of the Tibetan Policy and Support Act by the US House Foreign Affairs Committee severely violates international law and the basic principles of international relations, and sends the wrong signal to secessionist forces. China has expressed strong dissatisfaction and firm opposition to the bill and has lodged serious representations with the US side, Geng Shuang, Chinese Foreign Ministry spokesperson, said at a regular press conference on Thursday.

The act states that "Chinese officials who interfere in the process of recognizing a successor or reincarnation of the Dalai Lama will be subject to targeted financial, economic and visa-related sanctions, including those in the Global Magnitsky Act," adding "there should be no new Chinese consulates in the US until the establishment of a US consulate in Lhasa."

China's stance and policy over the Tibet question is constant and clear. Tibetan affairs are purely China's internal affairs and no foreign interference is allowed, Geng noted on Thursday. "China urges the US side to fully understand the high sensitivity of the Tibet question, keep its promise over the matter, stop exploiting it as a tool to interfere in China's internal affairs, and suspend pushing forward related bills."

The reincarnation of living Buddhas, including the Dalai Lama, should abide by the laws and regulations of the state, religious rituals and historical conventions, Geng said in March, after the 14th Dalai Lama said his incarnation could be found in India and warned that any other successor named by China would not be respected.

Chinese observers and a former senior religious affairs official said the bill reflects "extremely wicked intentions" of the US aimed at supporting secession and grossly interfering in China's domestic affairs.

They called for retaliatory measures such as imposing visa restrictions on the sponsors of the bill, including US Representatives James McGovern and Senator Marco Rubio.

The reincarnation of living Buddhas is a special inheritance of Tibetan Buddhism. It follows fixed rituals and procedures. The Chinese government respects and protects it. The system of reincarnation has a history of several hundred years and the title of the 14th Dalai Lama also followed religious rituals and historical conventions, and was granted by the then China central government, Geng said in March.

The bill also demands support for "democratic governance in the Tibetan exile community," and authorizes ongoing US appropriations that support Tibetans in Tibet and in South Asia.

Zhu Weiqun, former head of the Ethnic and Religious Affairs Committee of the National Committee of the Chinese People's Political Consultative Conference, told the Global Times on Thursday that the US House bill is laden with extremely wicked intentions aimed at supporting the Dalai clique and Tibet secessionists and challenges China's legitimate sovereignty and territorial integrity.

The passage of the bill has severely undermined China-US ties, he said.

Zhu urged US congresspeople to think through the consequences of the bill before enacting it, while warning that Chinese people and government would definitely oppose it and fight to the end.

Li Haidong, a professor at the China Foreign Affairs University's Institute of International Relations in Beijing, viewed the series of recent bills related to China's Hong Kong, Taiwan and Xinjiang as moves to contain China.

The House of Representatives is exploiting Tibet as a political tool to contain China, to pressure the Trump administration into making China-related policies which are sure to be confrontational, Li said, while noting such moves would not be in the interest of either the Chinese or US side.

Zhi Zhenfeng, a legal and policy expert at the Chinese Academy of Social Sciences, said that US individuals and NGOs that hold extremely anti-China sentiments should be sanctioned, however it is difficult to impose reciprocal sanctions, considering that the current world order is still dominated by the US.

Xiong Kunxin, a professor at Tibet University in Lhasa, capital of Southwest China's Tibet Autonomous Region, told the Global Times the attempts to interfere in China's internal affairs through long-arm jurisdiction and bullying will never succeed.

"As long as we continue to unite the people, implement Party policies to safeguard religious freedom, the US plots are doomed to fail," Xiong said.

Zhi believed that containing China has seemingly become the only consensus in the divided US political and academic circles, and the bitter hostility is likely to continue.