CHINA China urges US to reflect on its labor-rights violations

China urges US to reflect on its labor-rights violations

BEIJING, June 21 (Xinhua) -- China urges the United States to stop applying double standards on labor issues and reflect on its own serious violations of labor rights, a Foreign Ministry spokesperson said in a daily news briefing on Monday. 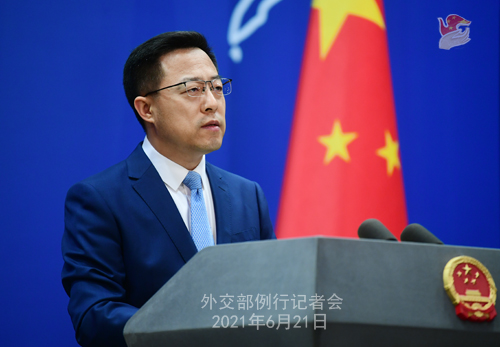 Responding to a query on U.S. remarks at the 109th International Labor Conference, spokesperson Zhao Lijian said that every perpetrator of forced labor and child labor should be held accountable for their actions.

He said that an examination of the U.S. record on labor rights shows that, over the past five years, all 50 U.S. states and Washington D.C. have reported cases of forced labor and human trafficking, with as many as 100,000 people trafficked to the United States from abroad for forced labor every year.

According to statistics from some academic institutions in the United States, at least half a million people in the country have been subjected to modern slavery and forced labor, Zhao said, adding that the U.S. Department of Homeland Security admitted that forced labor is widespread in the United States. The victims include both domestic citizens and foreign citizens from almost every region in the world, including vulnerable groups such as women, children and the disabled.

He said the International Labor Organization (ILO) has repeatedly expressed concern at the serious accidents experienced by child workers on U.S. farms, and urged the U.S. government to take measures to strengthen supervision and provide detailed statistics on child labor in the agricultural sector.

The United States ratified only 2 of 8 core conventions of the ILO, Zhao said, and relevant international labor union organizations have determined that there are systemic violations of labor rights in the country.

"What the United States should do now is to abandon its moral superiority, stop applying double standards on labor issues, reflect on its own serious violations of labor rights, and take the responsibility for them," he said.