CHINA China urges US to roll back move to expel Chinese students, researchers

China urges US to roll back move to expel Chinese students, researchers 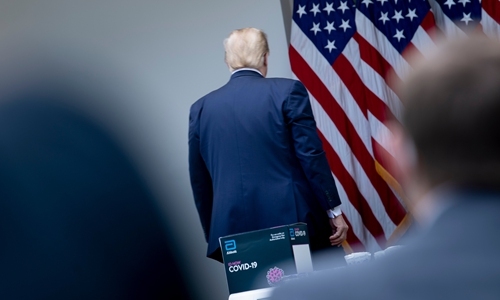 The expulsion of certain Chinese students and researchers in the US, which kicked off Monday, is stark political persecution and racial discrimination, Chinese Foreign Ministry spokesperson Zhao Lijian said, urging the US to roll back the decision immediately.

US President Donald Trump on Friday local time issued a proclamation blocking certain Chinese students and scholars, who he claimed "implement or support China's Military-Civil Fusion (MCF) strategy," from entering the country with F or J visas from June 1, a statement on the White House website said.

The statement cited concerns over China's use of graduate students to steal US technology, intellectual property and research.

The move seriously harms the legal rights of Chinese students and researchers in the US. It runs counter to the openness and freedom the US claims to champion and promises US leaders had publicly made as well as the trend of the times in international talent exchange, Zhao said at a press conference on Monday.

This has gravely impacted the normal cultural and personnel exchange between the two countries, Zhao noted, expressing strong opposition against the move.

Facts prove that public opinions cannot be violated. Any attempt to decouple with China, launch a new cold war against China, push China and the US toward conflict and create animosity between peoples on both sides will not succeed, Zhao said.

"We urge the US to stop making the use of various excuses to wantonly restrict and suppress Chinese students in the US and to roll back the move immediately. We support students in safeguarding their legitimate rights and interests in accordance with the law," he said.