BEIJING, July 6 (Xinhua) -- China urges White House trade advisor Peter Navarro and his like to respect facts and science, reject the wrong practice of putting political gains above people's wellbeing, and refrain from deceiving the world by telling lies and rumors about COVID-19, a Foreign Ministry spokesperson said Monday. 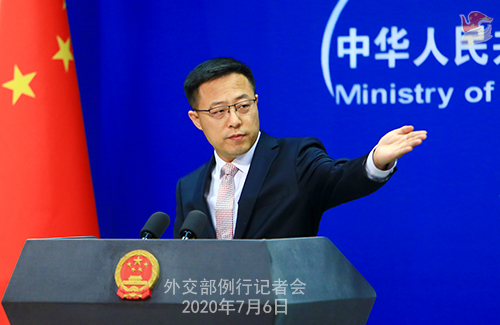 Spokesperson Zhao Lijian made the remarks at a press briefing when responding to the U.S. official's repeated stigmatizing China in the name of the disease.

"Navarro is a habitual liar and rumor-monger who has been spreading a 'political virus' to stigmatize China under the pretext of the pandemic," Zhao said.

Since the outbreak of COVID-19, the Chinese government has taken the most comprehensive, rigorous and through prevention and control measures to contain the spread of the epidemic and effectively cut off the transmission routes of the virus, he said.

According to Zhao, Wuhan, the capital city of Hubei Province, temporarily suspended outbound transportation on Jan. 23, when there was only one confirmed case in the United States.

Zhao further noted that from Jan. 24 to April 8, a period during which Wuhan was under lockdown, there were no commercial flights or trains leaving Wuhan for other Chinese cities or foreign countries.

However, on April 8, the number of confirmed cases in the United States soared to some 400,000 from a double-digit figure, and now the number has exceeded 2.87 million with the death toll hitting nearly 130,000, Zhao said.

China has achieved major strategic progress and brought the new infections under control within a short period of time, according to Zhao.

Zhao said the world has already seen through Navarro's nature of "lying, blame-shifting and anti-China sentiment," noting that the U.S. official had fabricated an expert "Ron Vara," an anagram of his own name, to tarnish China's image.

"Navarro should first answer the MSNBC host's question why the new disease count in the United States is so much higher than anywhere else in the world," Zhao said.

"He should also do some soul-searching and answer the following questions from the international community: what is the true reason behind the shutdown of the Fort Detrick biolab by the U.S. government? Does this have something to do with the EVALI, the seasonal flu and the COVID-19 pandemic? When will the United States invite experts of the World Health Organization or other international institutions to investigate the origin of COVID-19 in the United States?"

"We urge Navarro and his like to respect facts and science, have at least some sense of responsibility, put domestic anti-epidemic efforts and saving lives first, reject the wrong practice of putting political gains above people's wellbeing, and refrain from deceiving the world by telling lies and rumors," Zhao said.