CHINA China urges US to stop damaging its interests, calling for win-win cooperation

China urges US to stop damaging its interests, calling for win-win cooperation 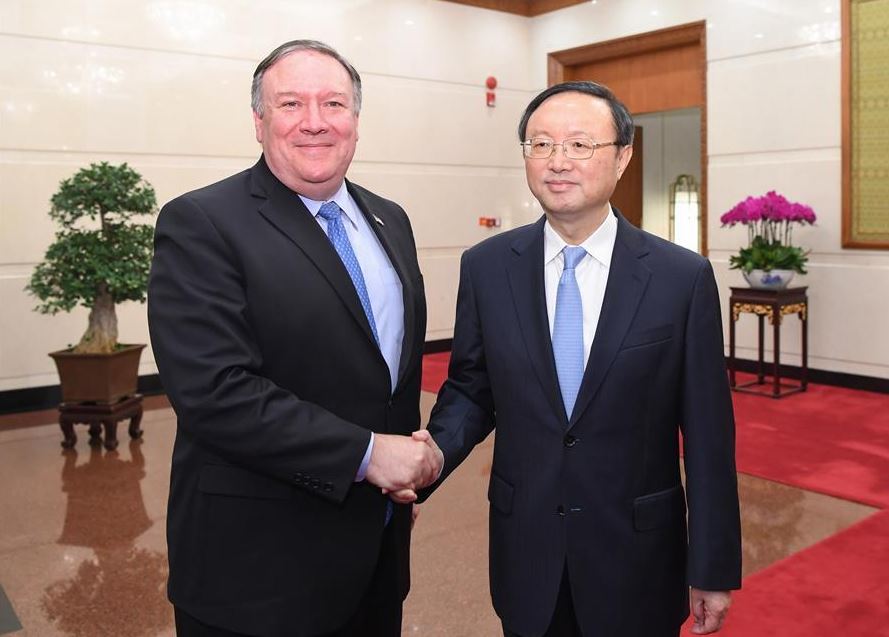 Yang Jiechi (R), a member of the Political Bureau of the Central Committee of the Communist Party of China (CPC) and director of the Office of the Foreign Affairs Commission of the CPC Central Committee, meets with US Secretary of State Mike Pompeo in Beijing, China, October 8, 2018. (Photo: Xinhua)

BEIJING (Xinhua) -- China on Monday urged the United States to immediately correct wrongdoings and stop actions damaging its rights and interests, calling on the two major countries to "follow the right path of win-win cooperation, rather than go astray toward conflict and confrontation."

Yang Jiechi, director of the Office of the Foreign Affairs Commission of the Communist Party of China (CPC) Central Committee, made the remarks while meeting with visiting US Secretary of State Mike Pompeo.

Noting the current China-US ties were at a critical phase, Yang, a member of the Political Bureau of the CPC Central Committee, said China had "openly demonstrated its position and lodged solemn representations to the US side on the negative remarks it had made against China."

He said China would firmly safeguard its sovereignty, security and development interests.

Yang called on the United States to "make right choices and meet China halfway to seriously implement important consensus the two heads of state have reached in their several meetings."

Pompeo said the United States was committed to realizing cooperation and win-win results with China, and is willing to strengthen communication with the Chinese side to seek for a constructive plan to tackle challenges the current bilateral relations are faced with.

He said the US side would adhere to the one-China policy and continue to maintain communication and coordination with China on international and regional issues.

The two sides also exchanged views on the situation on the Korean Peninsula.

Wang said that the United States had "escalated trade friction with China, took actions that jeopardized China's rights and interests on the Taiwan issue and unwarrantedly condemned China on its domestic and foreign policies."

This year marks the 40th anniversary of the signing of the Joint Communique on the Establishment of Diplomatic Relations between China and the United States.

"The past four decades have witnessed tremendous changes in both countries and substantial benefits from mutual exchanges," Wang said. "The most important lesson is that cooperation leads to win-win results while conflict ends up with a loss for both sides."

He said China would maintain peaceful development and continue reform and opening-up, to realize rejuvenation while avoiding the "power leading to hegemony" stereotype.

He called on the US side to stop "groundless accusations against China and wrong actions undermining China's core interests."

Wang illustrated China's positions on trade friction with the United States, as well as the Taiwan issue and the South China Sea issue.

He said a trade war would never solve problems and promised that China was still willing to negotiate with the United States "on the basis of equality, honesty and solemnity."

"China completely respects all countries' decisions, and will never intervene in other countries' domestic affairs," Wang said, noting China has a clear conscience in this respect.

"China urges the US side to abide by the one-China principle and the regulations of the three China-US Joint Communiques, stop official and military contact with Taiwan, revoke arms sales to Taiwan, stop unreasonable intervention in countries that have established or are hoping to establish relations with China, restrain 'Taiwan independence' forces, so as to maintain China-US relations and peace and stability across the Taiwan Strait through practical actions," he said.

Pompeo said that despite obvious differences on many issues between the two sides, the United States did not mean to oppose China's development, and there was no policy to fully contain China.

As the world's two largest economies and most powerful countries, the United States and China shoulder important responsibilities for world peace and prosperity, he said.

Pompeo called for more communication, trust and cooperation based on rules and promised that the US side adhered to the one-China principle.

He briefed Wang on his visit to the DPRK, voiced the US side's appreciation of China's consistent position on the Korean Peninsula and its efforts on denuclearization, and expressed a willingness to continue related cooperation.

He called on the US to attach importance to the DPRK's reasonable demands for safety and development with positive responses.

"China supports direct dialog between the United States and the DPRK, Wang said. "Based on mutual respect and accommodation of each other's concerns, China is willing to continue its unique and important role."