China on Thursday expressed strong opposition to a US destroyer’s trespass in the Xisha Islands, urging the US to stop making waves in the South China Sea. 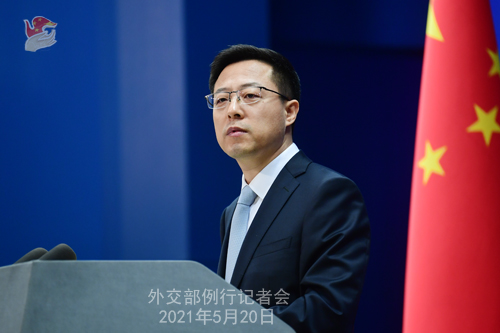 Chinese Foreign Ministry spokesperson Zhao Lijian made the remarks at a regular press briefing in response to a US warship’s entry into the Xisha Islands in the South China Sea. The USS Curtis Wilbur, an American guided missile destroyer, illegally intruded into China's territorial waters off the Xisha Islands without the approval of the Chinese government on May 20.

China strongly opposes that the US vessel entered the territorial waters of the Xisha Islands in the South China Sea without China’s permission, which violated China’s sovereignty and security and threatened regional peace and stability, said Zhao.

“China urges the US to immediately stop such infringement and provocative acts, and will take necessary measures to resolutely safeguard national sovereignty and security and maintain peace and stability in the South China Sea,” Zhao said.