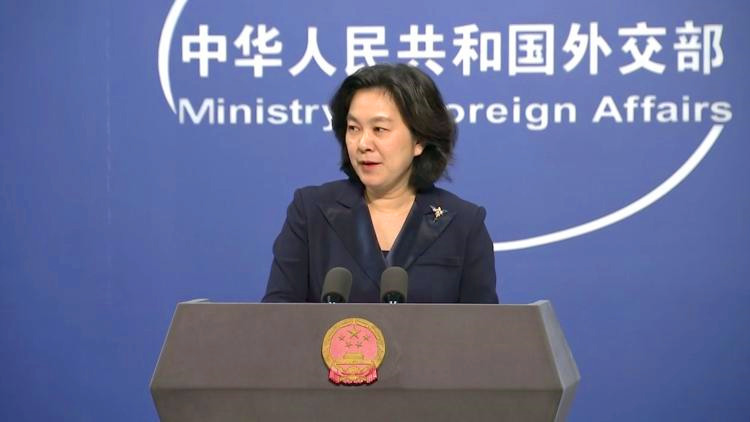 BEIJING, Dec. 8 (Xinhua) -- China on Tuesday urged the United States to withdraw the "erroneous decision" of imposing sanctions on relevant officials of the National People's Congress (NPC) over Hong Kong issues, vowing "firm and strong countermeasures" against the egregious act by the U.S. side to defend its sovereignty, security and development interests.

Foreign Ministry spokesperson Hua Chunying made the remarks in response to a statement by the U.S. Secretary of State Mike Pompeo, who on Tuesday made groundless accusations against China's promulgation and implementation of the Law of the People's Republic of China on Safeguarding National Security in the Hong Kong Special Administrative Region in accordance with the law and announced that the U.S. side will impose so-called sanctions on vice chairpersons of the NPC Standing Committee.

"The Chinese government and people express strong indignation at and strongly condemn the outrageous, unscrupulous, crazy and vile act of the U.S. side," she added.

Hua said Hong Kong is part of China, its affairs are purely China's internal affairs, and the United States is in no position to interfere. The NPC Standing Committee's legislation on safeguarding national security in Hong Kong in accordance with the Constitution to improve governance on Hong Kong and crack down on criminals is totally within China's sovereignty.

For some time, the United States has been meddling in Hong Kong affairs in every way under the pretext of upholding democracy, human rights and autonomy in Hong Kong, while supporting violent activities that split the nation and disrupt social order, and now the U.S. side is blatantly imposing these so-called sanctions against vice chairpersons of the NPC Standing Committee, Hua noted.

"This fully exposes the vicious intent of the United States to interfere in China's internal affairs, mess up Hong Kong and undermine China's stability and development," Hua said, adding that the retrogressive behavior of the United States will only trigger greater indignation among the 1.4 billion Chinese people, including Hong Kong compatriots.

The Chinese government is determined to oppose U.S. interference in Hong Kong affairs, to uphold China's sovereignty, security and development interests, and to implement "one country, two systems," said Hua.

She urged the United States to immediately withdraw this erroneous decision, stop interfering in China's internal affairs, and halt its progress down this dangerous and wrong path.

"In response to the egregious act by the U.S. side, China will take firm and strong countermeasures to defend its sovereignty, security and development interests," Hua added.