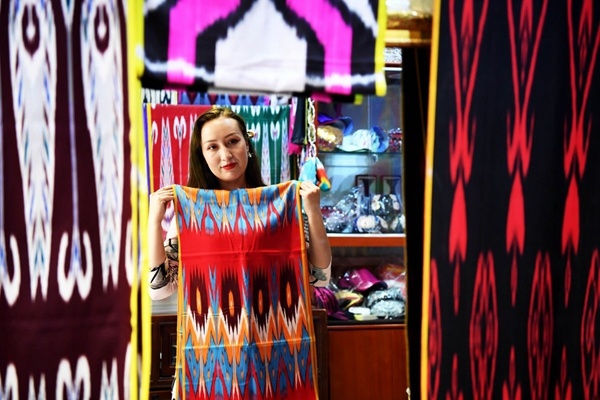 A customer visits a store in the "Dove Lane" in the old town Tuancheng of Hotan City, northwest China's Xinjiang Uygur autonomous region, May 26, 2020.(Photo: Xinhua)

China on Monday urged the United States to immediately withdraw its wrong decision of imposing sanctions on the Xinjiang Production and Construction Corps and two relevant officials, vowing to "resolutely fight back" if the U.S. side is bent on behaving like this.

He said Xinjiang-related issues are never about human rights, ethnicity or religion, but about counter-terrorism and anti-separatism. "Xinjiang affairs are purely China's internal affairs. The United States has no right and no ground to interfere."

Xinjiang Production and Construction Corps has made important contributions to promoting Xinjiang's development, ethnic unity, social stability and border security, living in harmony with all ethnic groups as a friendly and supportive companion, said Wang. "The U.S. allegation is nothing but rumor-mongering and mud-slinging."

The Chinese government is resolute in upholding its sovereignty, security and development interests, in fighting violent terrorist, separatist and religious extremist forces, and in opposing any foreign interference in Xinjiang affairs and China's other internal affairs, Wang said.

While commenting on Pompeo's recent accusation about so-called "surveillance" against ethnic minorities in Xinjiang, Wang said the allegation has no factual basis at all. "It is a common international practice to use modern scientific and technological products and big data to improve social governance, and the United States is no exception.

The installation of cameras in public places in accordance with law in Xinjiang does not target any specific ethnicity and it aims to improve social governance and prevent and fight crimes. This measure has been widely supported by people of all ethnic groups as it makes the society safer, he said.

"Speaking of surveillance, the United States has long been criticized for its massive surveillance using high-techs," Wang said.

According to a report released by Georgetown University, half of American adults, or more than 117 million people, are enrolled in a law enforcement face recognition network, and African Americans are most likely to be singled out, he said.

Moreover, relevant U.S. agencies have long been conducting massive, organized and indiscriminate cyber theft, surveillance and attacks against foreign governments, companies and individuals in breach of international law and basic norms of international relations, Wang said. "This has been a well-known fact to all."

Pompeo and his likes' remarks are "nothing better than malicious slanders," Wang said. "Such attempt to sabotage prosperity and stability in Xinjiang and seek pretext to have a hand in China's internal affairs is doomed to fail."