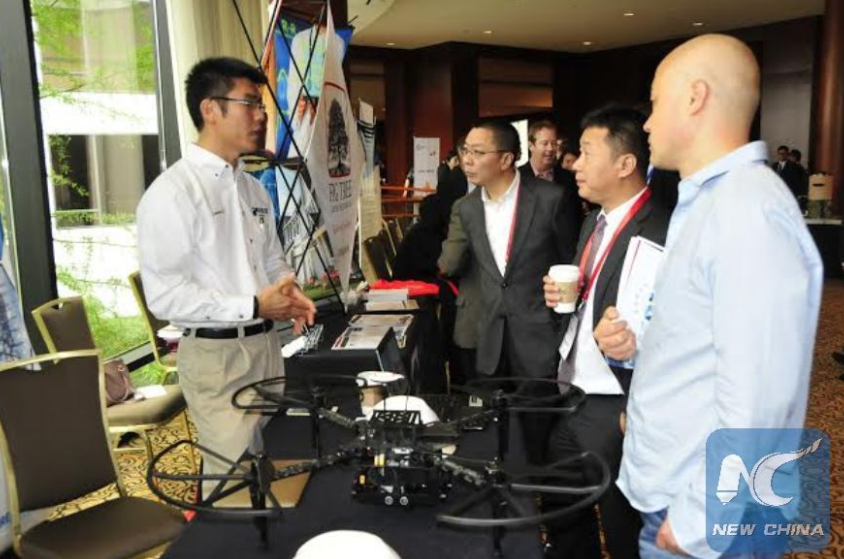 A Chinese company employee introduces drone to visitors at a China-US innovation and investment conference in Houston, the United States on May 17, 2016. (Xinhua/Zhang Yongxing)

Although China and the United States are at different stages of development, there is huge potential for the two countries to cooperate in technology and innovation, Chinese Consul General in Houston Li Qiangmin said Friday.

Addressing the opening ceremony of the 2018 South by Southwest Conference and Festivals in Austin, Texas, Li said the United States has been playing a leading role in science and technology for so long, while China is still at a stage of building up a moderately prosperous society in all respects.

"But China has a huge market and great potential. We are complementary in many fields, and can achieve win-win cooperation," he said.

He suggested that the two countries should build regional innovative partnership, adding that some projects between China and the US states of Texas and Georgia have been discussed.

More communication and cooperation in the field of innovation should be explored, Li said.

"China and the US have different culture and system. We have very good reason to believe that the two sides can be inspired by each other. We should break the cold-war mentality if we want to deepen our communication," he emphasized.

Making good use of existing innovation cooperation mechanisms is also vital for both sides, Li said, adding that the annual China-US Innovation and Investment Summit is one of the good examples that the two sides can make good use of.

The third China-US Innovation and Investment Summit will be held in two months, where hundreds of Chinese investors will meet their American counterparts for in-depth discussion and cooperation.

Founded in 1987 in Austin, Texas, South by Southwest (SXSW) is best known for its conference and festivals that celebrate the convergence of the interactive, film, and music industries.