CHINA China, US, Russia share consensus in Afghanistan, but Washington 'should correct its mistake to exchange cooperation'

China, US, Russia share consensus in Afghanistan, but Washington 'should correct its mistake to exchange cooperation' 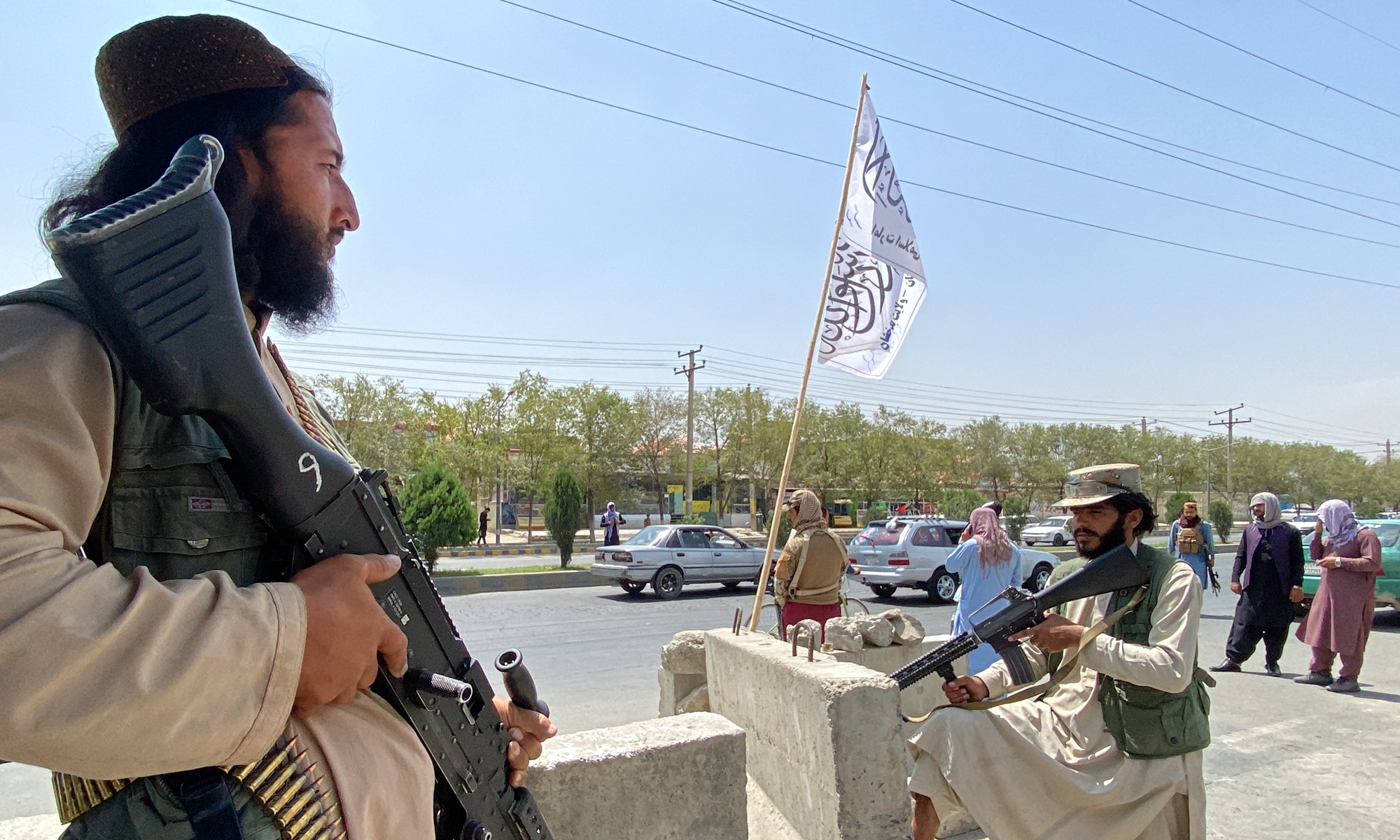 Taliban fighters stand guard at an entrance gate outside the Interior Ministry in Kabul on Tuesday. (Photo: AFP)

The US has discussed the situation in Afghanistan with China, Russia, Pakistan and its European allies on Tuesday to seek cooperation following its hasty retreat. This was not the first time Washington openly expressed to China its request on the issue, which shows a better attitude that is very different from the US hostility against China in other intense areas.

But Chinese analysts said although the US shares some common interests with China and Russia at the moment to ensure stability in Afghanistan, in the long term, when Washington completes its evacuation, some US decision-makers might want to see the country return to chaos so that it could use the mess to trouble both China and Russia.

If the US wants to get China's cooperation, it needs to show enough sincerity by taking actions to correct its mistakes, such as double standards on counter-terrorism and confrontation against China in other fields, Chinese experts warned. They stressed that if Afghanistan fails to achieve sustainable peace and becomes a breeding ground for terrorism again, those terrorist groups worldwide, who target the US as their prime enemy, would have a chance to plan another 9/11 attack.

At the request of the US side, Chinese State Councilor and Foreign Minister Wang Yi on late Monday exchanged views with US Secretary of State Antony Blinken over the phone on the situation in Afghanistan and bilateral ties.

During the phone conversation, Blinken expressed appreciation for China's participation in the Doha meeting on the Afghanistan issue, noting that the current situation in Afghanistan is entering a crucial stage.

Wang said that China stands ready to communicate with the US to push for a soft landing of the Afghanistan issue, so that a new civil war or humanitarian disaster will be prevented in Afghanistan and the country will not relapse into being a hotbed and shelter for terrorism.

This was not the first time the US has looked to China for help on the Afghanistan issue. On July 13, US department of state spokesperson Ned Price said at a press briefing that "we look to China, as we do other regional countries, to play a role that is constructive and that helps bring about that outcome that is in our collective interests."

Observers said this attitude is very different from the attitudes the US has shown in other fields, which means the US really needs China's help on the Afghanistan issue.

What the US want?

At this moment, or at least in the short term, China and the US do have common interests in Afghanistan, and Washington even more desperately needs assistance from Beijing. This is why Wang can confidently express China's requirements to Blinken, said experts.

Both China and the US agree that Afghanistan should not become a breeding ground for terrorism, because in the short term, if Afghanistan sees a massive humanitarian crisis or new conflicts before the US completely finishes its evacuation, the safety of US nationals and troops, as well as its legacy in the country will be in danger, said Pan Guang, a senior expert on counter-terrorism and Afghan studies at the Shanghai Academy of Social Sciences.

Now, Chinese nationals in Afghanistan are mostly safe and the "China town" in Kabul is now under the protection of the Taliban, so "our demand for evacuation is actually far less than [those of] the Western countries," Pan told the Global Times on Tuesday.

However, "some US personnel told me that the US can offer help to China if we need to evacuate our nationals, such as providing space on aircraft. But I told them this is the US' obligation, not a favor to offer, to help other country to evacuate their nationals if they really need assistance," Pan said, noting that "when talking to us, Americans like to offer some small assistance before mentioning the real deal."

The "real deal" is mainly about two major issues, according to Zhu Yongbiao, director of the Center for Afghanistan Studies at Lanzhou University.

Zhou said, "The first is that the US deeply believes China has absolute influence over Pakistan, and that Pakistan can effectively affect the Afghan Taliban, so as long as China is willing to cooperate, the US can indirectly affect Pakistan and the Taliban, or at least prevent miscalculation and frictions."

"The second is that the US wants China to share its pressure in economic assistance to Afghanistan, and to help Afghanistan develop so the country won't become a failed state and a hotbed for terrorism," Zhu said.

However, some decision-makers in Washington consider that when the US finishes its evacuation, the situation in Afghanistan would have far less direct impact on the US even if the chaos reemerges, and China, Russia and regional countries will be in trouble. This will serve US strategy to contain these two "biggest strategic competitors."

During the phone call with Blinken, Wang said, "The hasty withdrawal of US troops has had a severe negative impact on the situation in Afghanistan, and it will not be a responsible attitude if the US created new problems in its next move."

Zhu said it is possible that the US might change its policy to "urge peace and stability on the surface but act as a troublemaker under the table," so the foundation for China-US cooperation or US-Russia cooperation on the Afghanistan issue is not very solid.

But if the US supports terrorists, extremists and separatists to make trouble for China and Russia, it will backfire and it will pay a heavy price, Pan warned. He stressed that the US has had too many lessons in the past, so let's hope they are not so stupid again.

Zhu said that before the 9/11 attacks, "most US elites believed Afghanistan, which was a breeding ground for global terrorism and a country suffering from civil war, was not a big deal to the US as it's far from the US, but Osama bin Laden and Al Qaeda proved they were wrong."

If Afghanistan fails to restore long-term peace and sustainable stability, of course its neighbors will be directly impacted. But there will also be a global spillover. Most extremists and terrorists worldwide are still targeting the West, especially the US, as their top enemies, not China and Russia, Zhu noted.

And if it ignores the importance of Afghanistan and evades its responsibility to ensure the stability of the region, the US will sooner or later pay another heavy price like the 9/11 attacks, said experts.

Blinken told Wang over the phone that the US reiterates its opposition to all forms of terrorism and its pledges not to seek to foment unrest in China's western border areas, and the evolving situation in Afghanistan once again demonstrates the importance of US-China cooperation on regional security in a constructive and pragmatic manner.

"We hope the US is not just talking the talk, but at least will take actions to show its sincerity. China-US counter-terrorism cooperation has been suspended due to US double standards. If the US could correct its mistake by designating the East Turkistan Islamic Movement [ETIM] as a terrorist organization and cut off its connections with ETIM, this would be a positive signal," Pan said.

Compared to China-US cooperation where there is a lack of mutual trust, China-Russia cooperation is more solid and reliable.

China and Russia should also work together to encourage the Taliban… to ensure that the new Afghan government draws a line with terrorist forces and to fight against terrorism including ETIM to avoid Afghanistan from becoming a safe haven for terrorists and extremism, Wang said.

Lavrov said that the changes in Afghanistan have brought complications to the global situation. Russia is willing to work together with China to follow the development of the situation and keep close coordination.

Qian Feng, director of the Research Department of the National Strategy Institute at Tsinghua University, said that China and Russia also agree on not sending troops to fill the gap left by the US in Afghanistan, because Moscow remembers the lesson of the Soviet Union invasion of Afghanistan in 1979, and its military presence in Syria makes it unable to open another battlefield.

On the Afghanistan issue, the US, China, Russia and Pakistan are the four key players with major influence, throughout the previous mediation for the peace process to the current stage. "But unfortunately, India has no place at the table, because its policy on Afghanistan was never neutral, and it holds a very inflexible hostile stance toward Taliban," Qian said.

The current situation makes New Delhi very embarrassed and there is no significant role it could play, said Chinese experts.

"On the Afghanistan issue, the major powers' coordination is just an external element, which cannot solve the problems and conflicts between different forces in the country… so the major powers should not play the role of 'master' to directly intervene the internal affairs of Afghanistan. This is the reason why many major powers made a serious and deadly mistake in Afghanistan," Zhu said.