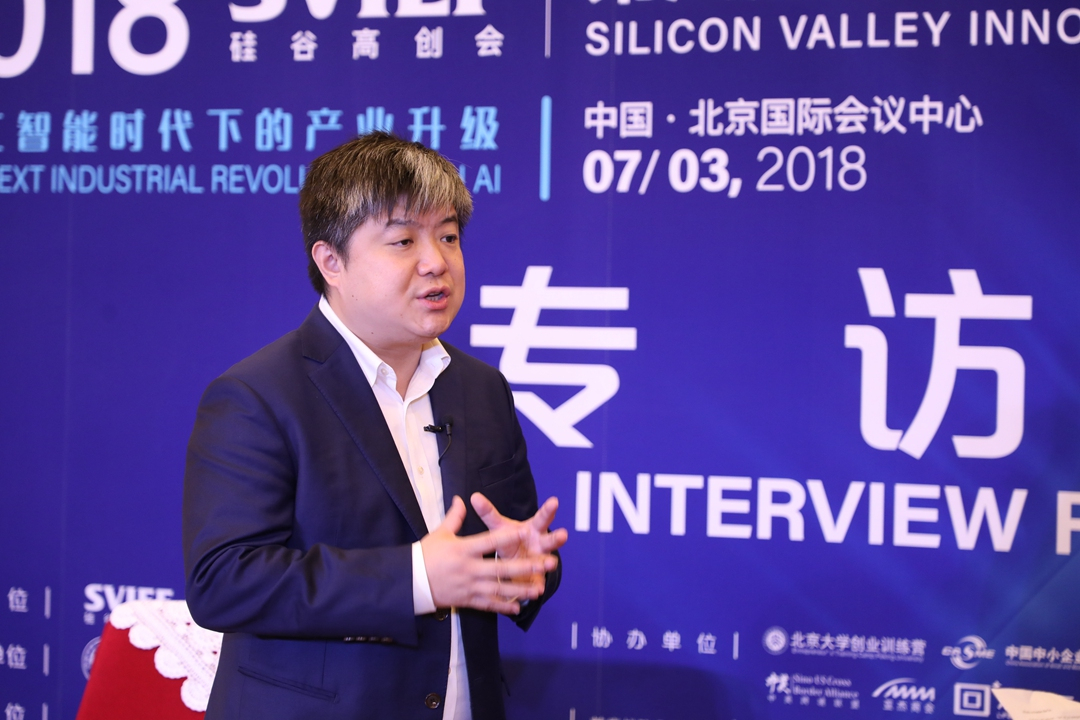 Hu Yu, co-founder of iFlytek, speaks with CGTN on the sidelines of the 2018 Silicon Valley Innovation and Entrepreneurship Forum in Beijing, July 3 2018. (Photo: CGTN)

Trade tensions between the US and China are mounting as Washington’s deadline for imposing tariffs on Chinese imports is this Friday. It seems that the friction has not spilled over into high tech collaborations between the two sides.

That’s according to scientists and CEOs at the 2018 Silicon Valley Innovation and Entrepreneurship Forum (SVIEF), which was held in Beijing on Tuesday. This is the third time that Silicon Valley’s largest tech expo has come to China and showcased the most cutting-edge tech products from both countries.

iFlytek signed a five year research deal with MIT’s AI lab in June. China's top voice AI tech company is also a world leader in the sector, and has seen its products and technologies applied in an array of fields including education, smart cars, law enforcement and much more.

Hu Yu, one of iFlytek's co-founders, told CGTN that their cooperation has not been affected by the China-US trade tensions yet, as they are co-working on basic, long-term research rather than immediately usable technologies.

“If we can work with American institutions and make progress on basic research, I think it would also help US colleges and industries quite a lot,” Hu said.

Hu said he is optimistic about the prospect of China-US tech cooperation, which has been running well and been mutually beneficial to both countries for decades. He added that he’s not concerned even if the trade dispute worsened, as his company is prepared.

“I can proudly say all our technology is proprietary, we don’t rely on external stuff, on the contrary, we use our own platform to share technology,” he said.

For the foreign tinkerers and thinkers who gathered at the forum, there also seemed little concern that the China-US trade tensions could hurt tech cooperation.

“Trump is on the east coast, and the tech is mostly on the west coast. I think for about five seconds we’d be very worried. Then when everyone thought about it, nothing he said was new,” said Andra Keay, the managing director of Silicon Valley Robotics, which is the world’s largest industry association working towards supporting innovation and the commercialization of robotics technologies based in California.

Scientists see China as the next epicenter for the high tech

Keay also said she noticed city clusters for robotics development in China are similar to Silicon Valley, and China has the advantage of having its own large tech unicorns, as well as having ample human capital and a beneficial commercialization environment for technologies.

“Human capital is the biggest shortage that every robotics and AI cluster is facing right now, and the demand is focused on getting that human capital. That’s where I think that China has the incredible advantage because there are so much human capital as well as the tech unicorns and government support.”

Steve Mann, the Canadian inventor known as “the father of wearable computing,” also the founder of MannLab China, said he predicted Shenzhen to become the world's epicenter of many technologies, and one of those things is wearables.

With regard to the trade tensions, it seems that scientists like Mann simply filter out political noise and train their laser focus on technology.