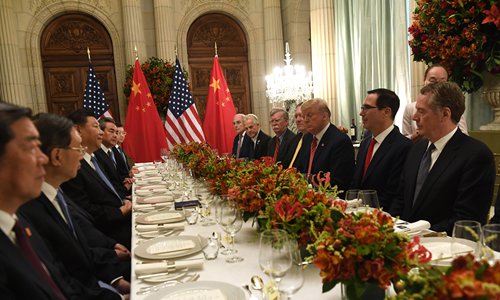 Members of Chinese and US delegations hold a dinner meeting at the end of the G20 Leaders' Summit in Buenos Aires, on Saturday local time. (Photo: AFP)

The China-US trade truce not only relieved nervous investors but also stabilized the global political environment, Chinese analysts opined on Monday after the G20 summit concluded in Argentina. The observers' remarks came after China and the US announced a trade cease-fire following a meeting between President Xi Jinping and President Donald Trump on the sidelines of the summit in Buenos Aires on Saturday."The consensus reached during the meeting is of great significance as it not only effectively stopped the further expansion of China-US trade frictions but also created new visions for cooperation," said Chinese Foreign Ministry spokesperson Geng Shuang. The two sides will step up negotiations to bring their trade relations back to the normal track and achieve win-win results, Geng said at a daily briefing on Monday.People's Daily published two commentaries on its top news page on Monday saying that as long as China and the US hold a sincere attitude, no problem could not be solved."It's not a terrible thing that the two countries have problems. The point is to solve the issues via talks and negotiations," read one of the commentaries. The meeting between the top leaders again proves that the common interests between China and the US are greater than the disputes, and that the need for cooperation outweighs their frictions, it said. The two countries have sufficient "political wisdom" to develop bilateral relations without confrontation and conflicts, the commentary said. Political stabilityThe cease-fire could forestall an economic downturn and stabililize the global political environment, Chinese experts told the Global Times on Monday. The outcome of the summit came as a relief to global investors, Yang Delong, chief economist at the Shenzhen-based First Seafront Fund Management Company, told the Global Times on Monday. It would markedly shore up investors' confidence in global economic growth and stimulate US-China economic growth in a positive way, Yang believed.Global markets on Monday also actively responded to the China-US trade truce, with Chinese mainland and global stocks shooting up across the board on Monday and the yuan remaining stable. The Shanghai Composite Index edged up by 2.57 percent to 2,654.8 points while the Shenzhen Component Index rose 3.34 percent to 7938.47 points. Nearly 100 stocks surged to their daily trading limit of 10 percent on Monday.Zhou Yu, director of the research center of international finance at the Shanghai Academy of Social Sciences, said that the months-long trade dispute has already dragged down the global economy, driving down oil prices and disturbing global financial markets."The trade cease-fire between the US and China will send optimistic signals to the global markets that will help prevent global economic conditions from worsening," Zhou said. Zhou noted that politically it was important for China and the US to maintain good and stable economic relations as an economic cold war might lead to a political cold war, or even military confrontation between the US and China. "If the trade disputes evolve into political confrontation, it would lead to a tense and risky global diplomatic environment," Zhou told the Global Times on Monday. "The two countries' trade truce is helpful in maintaining a stable global political environment." Short 90 days Experts cautioned that 90 days is too short to settle issues such as technology transfer, intellectual property protection and non-tariff barriers. Zhang Jiadong, director of Fudan University's Center of South Asian Studies in Shanghai, said that the two countries will be able to reach concrete trade agreements, such as China buying more US soybeans, during the 90 days."I think maybe China and the US will sign some framework agreements on issues like intellectual property protection and technology transfer during the trade truce, but a fundamental solution to the problems needs more time," he told the Global Times on Monday. The 90-day truce shows that China-US trade disputes have leeway for change, he said, and the trade talks might extend beyond the 90 days.Zhou stressed it was likely Trump would make further concessions and give China more time to settle the trade issues as the damaging effects of the dispute have already been made manifest on the US economy.