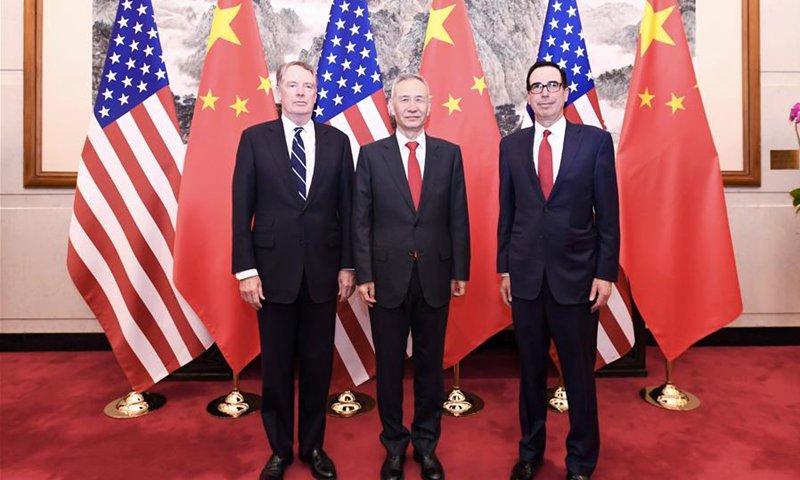 Chinese Vice Premier Liu He, also a member of the Political Bureau of the Communist Party of China Central Committee and chief of the Chinese side of the China-US comprehensive economic dialogue, US Trade Representative Robert Lighthizer and Treasury Secretary Steven Mnuchin co-hosted the eighth round of China-US high-level economic and trade consultations in Beijing, March 29, 2019. (Photo: Xinhua)

A mix of optimism and prudence on a deal to put an end to the China-US trade war was expressed in China over the weekend as top trade negotiators from the two sides concluded their latest round of talks in Washington.  The talks, which ended on Friday, were the ninth since the two engaged in a tariff war that has affected the global economy for more than a year.  Next week, negotiators will "be in touch" by phone, Bloomberg reported Saturday, citing White House National Economic Council Director Larry Kudlow.In the latest two rounds of negotiations held in Beijing and Washington, respectively, the two sides skipped opening ceremonies and streamlined formalities to "seize every minute and second to get straight to the point," read a Xinhua News Agency commentary.  The two sides discussed the agreement text on technology transfer, protection of intellectual property rights, non-tariff measures, the services industry, agriculture, trade balance and enforcement mechanism."New progress" has been made on the text of the agreement on the issues mentioned above, Xinhua reported. None of the most important China-US trade issues were omitted this time and the mention of the text of an agreement means the two sides are a step closer to a final draft, Chinese analysts said. Based on the press releases from both sides, 90 percent of the mission has been accomplished, including the text and content of a deal acceptable to both sides, Ruan Zongze, executive vice president of the China Institute of International Studies, told the Global Times on Sunday.Neither Beijing nor Washington said if a deadline for a deal has been set, while debates are ongoing as to whether a "good" deal could be reached, or which case is the worst scenario, a bad or no deal."A deal will be signed and there's no doubt about this. Both sides are convinced the trade spat cannot remain an outstanding issue. They are sprinting and have no major obstacles," said Ruan. Whether the agreement is a good one will not be defined unilaterally by the US, and it could be called a good one only if both sides are satisfied with it, Ruan said.However, Huo Jianguo, vice chairman of the China Society for World Trade Organization Studies, warned that though signing the deal is only a "matter of time," a failed deal is still possible, and the US will pay a big price for that.China has expressed its sincerity on US concerns with actions. If nine rounds of high-level negotiations cannot hammer out a deal, it could only be the US side's responsibility, Huo said.China's commitment to strike a deal is consistent as it believes addressing the trade spat is beneficial for China's economic development, China-US relations and global economic stability, Huo told the Global Times on Sunday. The talks has sparked a positive response. Stock markets in China and the US rose slightly on Thursday before the talks, with industry insiders predicting that the markets will continue to rise on Monday.Chicago Board of Trade crop futures traded higher in the trading week ending Friday, with soybeans adding over 1 percent, as oil seeds were boosted by optimism over trade talks between the US and China, Xinhua said Saturday.The global economy is "highly likely" to fall into recession if the US and China fail to reach a trade deal within three months, said Moody's Analytics Chief Economist Mark Zandi, CNBC reported. "Business sentiment across the globe is extraordinarily fragile," the economist told CNBC on Tuesday. He added that a recent survey conducted by Moody's showed that confidence among companies was at its lowest since the end of the financial crisis a decade ago.If talks between the US and China break down and end without a trade deal, that could hurt business sentiment further and lead companies to reduce hiring. If that happens, unemployment would rise, causing consumers to lose faith in the economy, he said.Subject to changeUS President Donald Trump, speaking to reporters on Friday, hailed the latest round of discussions as a "big success." Trump said a deal could be announced in the next four to six weeks, media reported.Washington does not want to overhaul or destroy the deal, and could not bear the consequences of doing so, but Trump could walk away from it or hold off signing the deal for greater leverage, Huo said.Trump must show that the US is taking control as he might be blamed for "making compromises" to China on trade issues, especially as the 2020 US presidential race heats up, said Huo.However, for China, it's always about being practical and focusing on solving problems,  Huo added. Analysts also urged caution on the complexity of the unprecedented trade friction since World War II. Last-minute changes could occur, such as the US seeking a higher price or raising new demands as the two sides sprint for a final deal, Ruan said."A deal does not mean the end to all the disputes or the beginning of triumphant relations between the world's two largest economies," he said, calling for a realistic view on the issue.