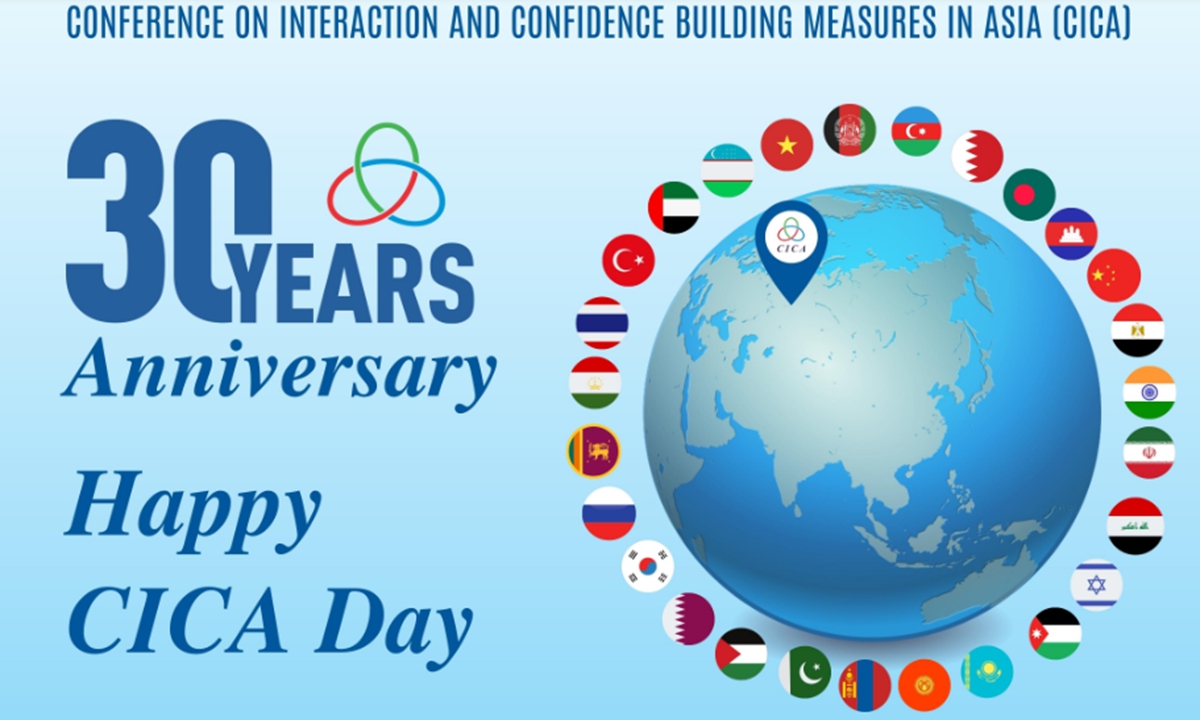 Photo: website of Conference on Interaction and Confidence Building Measures in Asia

Amid renewed conflict and tension across Eurasia, the sixth Conference on Interaction and Confidence Building Measures in Asia (CICA) summit, an inter-governmental forum, is taking place on Wednesday and Thursday in Astana, capital of Kazakhstan, where topics concerning regional security and development are expected to top the agenda.

At the invitation of the government of Kazakhstan, which holds the presidency of the CICA, Chinese Vice President Wang Qishan is leading a delegation to Kazakhstan and is attending the Sixth CICA Summit in Astana from October 12 to 13, according to Chinese Foreign Ministry spokesperson Mao Ning. Chinese observers believe that Wang's attendance, as one of senior Chinese leaders, reflects the great significance that China attaches to the multilateral platform for promoting regional security, peace and development, and its ties with Central Asia.

This shows that under the special international situation with profound changes unseen in a century, China hopes to continue to strengthen mutual trust on security with other Asian countries, Zhang Hong, an associate research fellow at the Institute of Russian, Eastern European & Central Asian Studies of the Chinese Academy of Social Sciences, told the Global Times on Wednesday.

The Astana Times reported on Wednesday that the sixth summit marks three major events - the 30th anniversary of CICA, the end of Kazakhstan's two-year chairpersonship in the conference, and the objective to transform the conference into a full-fledged organization.

"In the context of new challenges and threats we hope to transform CICA into a full-fledged international organization at the upcoming summit in October in Astana to contribute to global mediation and peace-making," Kazakh President Kassym-Jomart Tokayev said during his speech at the 77th UN General Assembly in September.

As this sixth summit of the CICA, a multilateral cooperation body, 11 presidents from Azerbaijan, Iraq, Iran, Qatar, Kyrgyzstan, Palestine, Russia, Tajikistan, Türkiye, and Uzbekistan. President of Belarus Alexander Lukashenko will participate as an observer and vice presidents of China and Vietnam will also attend the summit, according to spokesperson of the Kazakh Foreign Ministry Aibek Smadiyarov.

The CICA has 27 member states encompassing nearly 90 percent of the territory and population of Asia, generating around two-thirds of global GDP. Nine countries and five multinational organizations, including the United Nations, have observer status, according to the Astana Times.

Kazakhstan's Deputy Minister of Foreign Affairs Adil Tursunov said on October 5 that the summit will gather member states and international organizations to discuss cooperation measures to promote peace, security and stability in Asia, the Astana Times reported on October 6.

Zhang said that over time, the CICA has evolved into a multilateral platform for strengthening security and prosperity in Asia. Unlike the Group of Seven (G7) which has become an exclusive bloc under the shadow of the US hegemony, the CICA stands for a different security concept reflecting true multilateral diplomacy, Zhang noted.

At the summit, the Chinese delegation is expected to promote the security concept based on opening and inclusiveness, object to bloc politics and support multilateralism in a bid to enhance the mutual trust among Asian countries, the observer predicted.

Hot-button issues including the Ukraine crisis and Afghanistan are likely to be covered, the observer said. Although Asian countries may have conflicts and differences due to historical and practical issues, and even enter into disputes, we should manage risks and differences through dialogue, and the CICA provides a platform for this, Zhang said.

Three decades after the first summit, some analysts in the West questioned whether effective collective security structures can take root in Eurasia through this summit as the Ukraine crisis continues to escalate. The Diplomat said on Tuesday that the Russia-Ukraine conflict (Russia is a CICA member, Ukraine an observer) has complicated many of the political-economic structures in which Moscow is a member, but other difficulties exist too.

In response, Chinese observers said that such doubts expose that so-called analysts view the CICA through a cynical lens and do not realize that the CICA is not a military bloc, but a platform for cooperation and exchange.

As a non-Western platform, the CICA has always held the aspiration of Asian countries to maintain regional security, peace and development. Asian countries do not want their regional affairs to be left to the long-arm jurisdiction of the West, and Asian countries should make their own efforts, Zhang said.