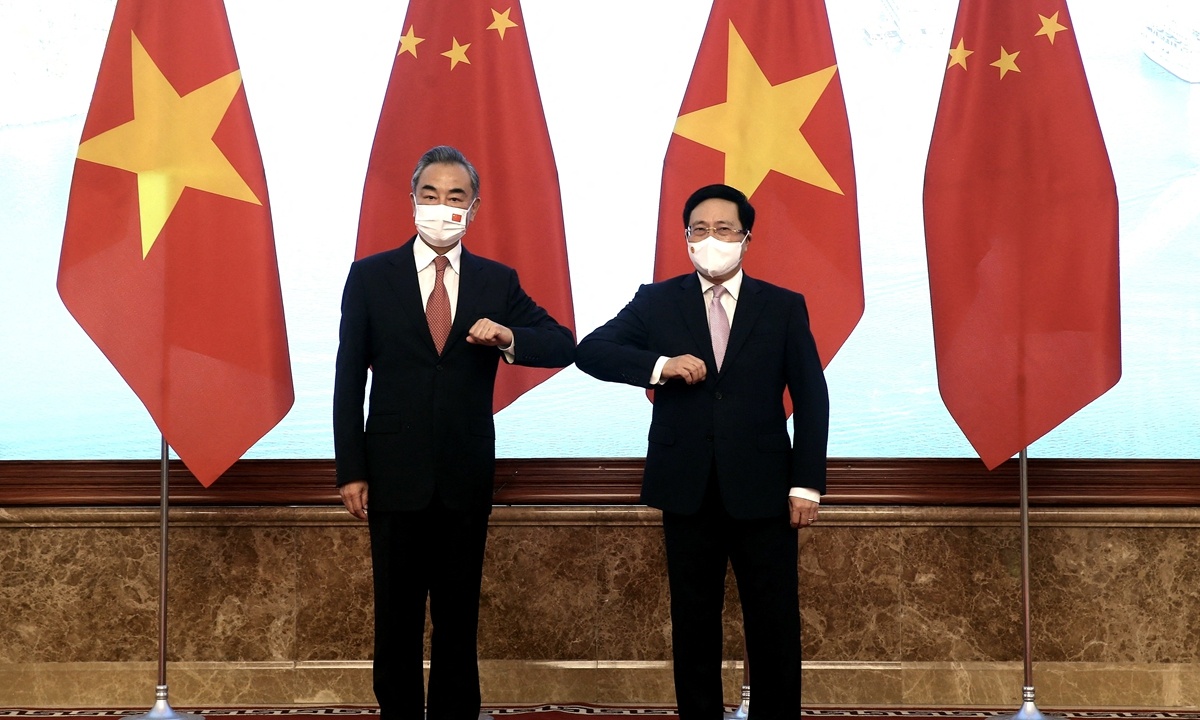 Visiting Chinese State Councilor and Foreign Minister Wang Yi said China and Vietnam should avoid taking unilateral actions that would complicate the situation or expand the dispute in the South China Sea, and keep alert to external forces' interventions and attempts to sow discord between the two countries.

Wang co-chaired the meeting of the 13th Steering Committee for Vietnam-China Bilateral Cooperation with Vietnamese Deputy Prime Minister and Foreign Minister Pham Binh Minh on Friday, where the two agreed to enhance high-level exchanges and inter-party communications, push forward cooperation on trade and COVID-19 control, and manage differences to avoid risks over the South China Sea.

Wang's visit to Vietnam, part of his week-long South East Asian tour, came about two weeks after US Vice President Kamala Harris' trip to the region. But unlike Washington's attempt to pit regional countries against China by lip-services and vague promises, Beijing has a clear mind on boosting relations with neighbors to achieve a win-win cooperation, observers said on Saturday.

At the meeting, Wang stressed that amid the major changes rarely seen in a century and the pandemic, the two socialist neighbors are destined to cooperate to overcome the difficulties together. China and Vietnam have cooperated effectively on epidemic control and the bilateral trade spiked despite of the pandemic, Wang noted, according to a statement on the website of Chinese foreign ministry.

Official data revealed that bilateral trade reached $133 billion in 2020, up 13.8 percent year on year. China continues to be the biggest trade partner of Vietnam. Meanwhile, Vietnam ranks 6th on China's trade partner list, from 8th in the previous year.

Wang and Pham agreed to promote high-level visits; effectively implement cooperation between the two Parties; uphold the role of the two foreign ministries in coordinating and boosting the bilateral relations; implement mechanisms of exchange and cooperation in defense, security and law enforcement; and increase experience sharing in COVID-19 prevention and control, including cooperation on vaccines, VNA reported.

Wang emphasized that China and Vietnam should cherish the hard-won peace and stability in the South China Sea, put the maritime issue to its proper position within the scope of bilateral relations, avoid taking unilateral actions that would complicate the situation or expand the dispute, and keep alert to external forces' interventions and attempts to sow discord, sending positive signals to the international community that the people of the two countries have the capability and wisdom to manage differences and expand cooperation areas.

Xu Liping, director of the Center for Southeast Asian Studies at the Chinese Academy of Social Sciences, told the Global Times that Vietnamese leaders have the political wisdom to maintain a balance between China and the US.

The US has been trying to depict China as a security threat to the region and court Southeast Asia toward its camp, but those kinds of attempts are doomed to fail as even Vietnam, a country that has maritime disputes with China, knows what's beneficial -- to jointly manage differences and risks, and expand cooperation and enhance mutual trust, Xu said.

In comparison to US' abrupt and irresponsible withdrawal from Afghanistan and its hoarding of vaccines, China's efforts to help its neighbors and boost cooperation to jointly fight the pandemic are more reliable, observers said.

Xu said that China and Vietnam, as socialist countries, share a similar political system, and that Wang's visit will further boost political mutual trust between the two countries, while continuing to devote efforts to manage differences and strengthen consensus on the South China Sea.

Meanwhile, Harris and US defense chief Lloyd Austin's visits to Vietnam failed to upgrade US-Vietnam relations due to their mistrust. Even if Vietnam wanted the US to put pressure on China over the South China Sea, not much progress was made in those frequent visits by senior US officials, Xu noted.

Indeed, Southeast Asian countries have a practical strategy that is in line with their national interests and Wang's trip showed that China and the neighboring countries are determined to enhance diplomatic relations, analysts said.

After the visit to Vietnam, Wang will continue his regional tour to Cambodia, Singapore and South Korea.

Commenting on Wang's visits to the four neighboring countries, the Chinese Foreign Ministry said on Tuesday that China will focus on cooperation in epidemic prevention, economic development, implementation of the Belt and Road Initiative and the construction of a community with a shared future for mankind.