China has thwarted attempts by some countries to hijack the International Atomic Energy Agency (IAEA) Board of Governors over the transfer of nuclear material under the framework of the AUKUS nuclear-powered submarine deal, said a Chinese envoy, as a meeting of the IAEA Board on Monday set up a stand-alone item over the issue at China's proposal despite the IAEA director general having recently published a report slammed by the Chinese Foreign Ministry on Tuesday as quoting self-justifying arguments by the US, the UK and Australia in a unilateral manner. 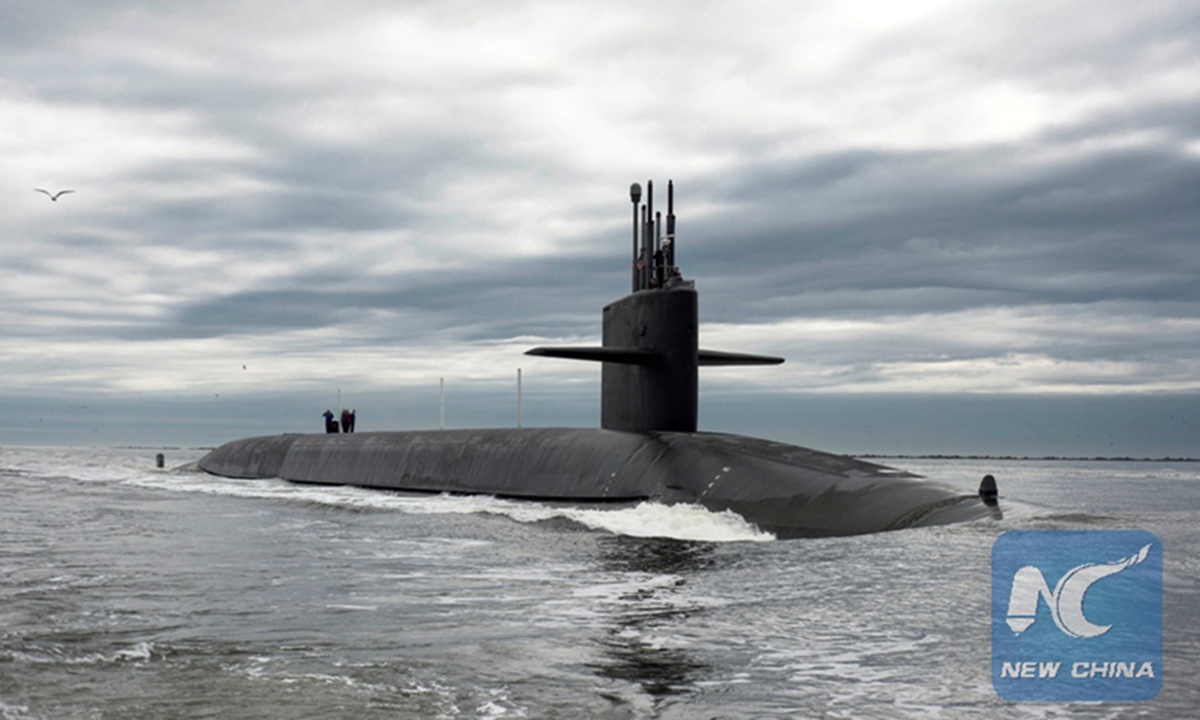 The AUKUS nuclear-powered submarine deal risks proliferation of weapons-grade nuclear material, which could be turned into nuclear weapons by Australia, a non-nuclear weapons state, without many technical difficulties and international supervision, experts warned on Tuesday.

At China's request, a meeting of the IAEA Board of Governors on Monday decided by consensus four consecutive times to examine the "Transfer of the nuclear materials in the context of AUKUS and its safeguards in all aspects under the Non-Proliferation of Nuclear Weapons (NPT)" as a stand-alone item, said Wang Qun, China's Permanent Representative to the UN office in Vienna, in a press release on Monday.

This thwarted attempts by some countries to hijack the board reflects the international community's concern over the transfer of nuclear weapons materials under the nuclear submarine cooperation and shows that the US-style "small circle" practice is unpopular at the agency, Wang said.

Wang's remarks came after IAEA Director General Rafael Grossi recently published a report on AUKUS. Wang said while it is a right step toward urging the US, UK and Australia to fulfill their nonproliferation obligations, the three countries are trying to set up a separate agenda item on the issue, aiming to hijack the IAEA Secretariat to whitewash their proliferation activities and create divisions within the agency.

This report lopsidedly cited the account given by the US, the UK and Australia to explain away what they have done, but made no mention of the international community's major concerns over the risk of nuclear proliferation that may arise from the AUKUS nuclear submarine cooperation. The report turns a blind eye to many countries' solemn position that the AUKUS cooperation violates the purpose and object of the NPT, and drew ultra vires, misleading conclusions on matters that should have been decided by member states through discussion, Mao Ning, a spokesperson at China's Ministry of Foreign Affairs, said at a press conference on Tuesday.

The US, the UK and Australia should not proceed with relevant cooperation, and the IAEA Secretariat should not have consultation with the three countries on the so-called safeguards and monitoring arrangement for their nuclear submarine cooperation, Mao said.

In its essence, the AUKUS-related nuclear material transfer is nuclear proliferation, and the three countries must give up this move that poses threats to the world, Wang stressed.

The AUKUS nuclear-powered submarine deal goes beyond the existing international nonproliferation regime and the mandate of the IAEA Secretariat, meaning the issue cannot be handled by the three countries alone and must be handled by the IAEA member states, Wang said.

The deal could involve the transfer of tons of weapons-grade nuclear materials in the form of highly enriched uranium in order to build eight nuclear-powered submarines for Australia, a non-nuclear weapons state. They are enough to manufacture nearly a hundred nuclear weapons, Li Chijiang, vice president and secretary-general of the China Arms Control and Disarmament Association, told the Global Times in an interview in July.

It will damage the global strategic balance and stability, encourage other countries to join the nuclear arms race, escalate geopolitical tensions and bring the Asia-Pacific region to a wrong path of confrontation and splitting-up, Li said.

From a technical point of view, it is not a big problem for Australia to convert the weapons-grade nuclear materials for submarine reactors into actual weapons under the assistance of the US and the UK, not to mention that the AUKUS deal also involves providing Tomahawk cruise missiles to Australia, which could carry nuclear warheads, a Beijing-based military expert who requested anonymity told the Global Times on Tuesday.

It would also be difficult for the international community to supervise and check if the three countries would have done so, because submarines work underwater and are stealthy in nature, the expert said.

That is why the AUKUS nuclear-powered submarine deal is such a dangerous thing to the world and must be stopped before the nuclear proliferation starts, analysts said.