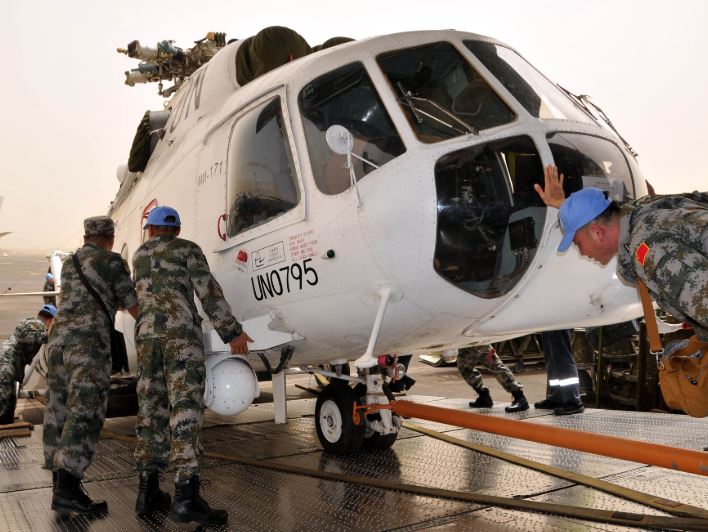 A Chinese envoy said Friday that his country supports the planned withdrawal of the UN-African Union Hybrid Operation in Darfur (UNAMID), and calls for the promotion of the political process in the Sudanese region through dialogue. China welcomes the UNAMID strategic assessment report of the UN secretary-general and the African Union Commission chairperson, which indicates that the overall security situation in Darfur is stable, and suggests that the drawdown should continue, said Wu Haitao, China's deputy permanent representative to the United Nations. "We hope that the (Security) Council members attach importance to the recommendations in the report and, on the basis of respecting the will of the Sudanese government, make proper arrangements for the future mandate of UNAMID to make sure that the mission will complete its planned withdrawal in 2020." China commends the contributions by UNAMID to maintaining peace and stability in Darfur and supports the extension of its mandate, he told the Security Council. The current UNAMID mandate expires on June 30, 2019, and the Security Council is scheduled to extend it on June 27. With the joint efforts of Sudan, UNAMID, and international partners, the situation in Darfur has improved substantially in recent years, said Wu. Since the second half of 2018, when UNAMID began to implement the transition plan through gradual reconfiguration and drawdown, the situation in Darfur has continued to be stable, he said. "This fully demonstrates that the Sudanese government has the capacity to assume its responsibility to maintain peace and security in Darfur on its own." He called for efforts to promote the political process in Darfur, which has been plagued by a war between Sudanese government forces and the indigenous population since 2003. "China hopes that all parties concerned in Darfur will continue to exercise restraint. It calls on the opposition parties and armed groups that have not yet joined the political process to effectively abandon the military solution, resolve their disputes and differences through political means such as dialogue and consultation, and work together to safeguard peace and stability in Darfur," said Wu. He asked for respect for the leadership of the Sudanese government on the issue of Darfur. The Sudanese government bears the primary responsibility for maintaining peace and stability in Darfur. When helping solve the Darfur issue, the United Nations and the international community should effectively strengthen communication and coordination with the Sudanese government, earnestly heed its views and suggestions, and focus on supporting the Sudanese government in strengthening its security capacity building, he said. He also asked the international community to continue to provide humanitarian and economic assistance to support the peacebuilding efforts of the Sudanese government in Darfur. The current focus is to help facilitate the return and settlement of internally displaced persons in Darfur, he said. China welcomes the efforts of the UN Development Program, the Peacebuilding Commission, and others to provide necessary support for the construction and development of Darfur, said Wu. China has always supported the peace process in Darfur. As one of the major troop-contributing countries for UNAMID, China has made positive contributions to the maintenance of peace and stability in Darfur over the years, he said. China is ready to work with the rest of the international community to continue to play a constructive role in realizing peace, stability, and development in Darfur, he added.