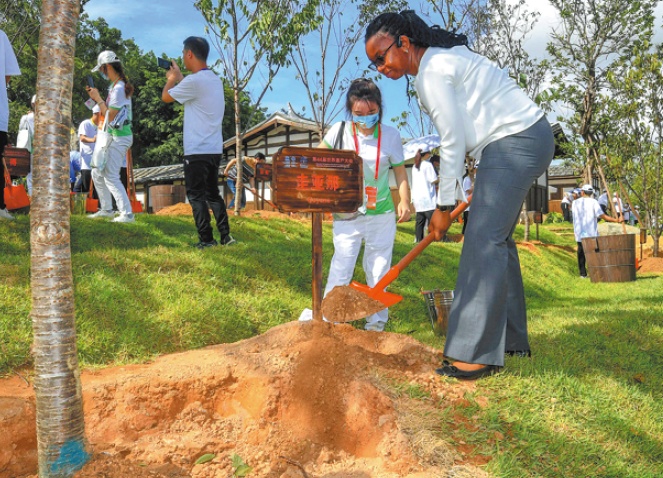 China will take on stronger international responsibilities to support the United Nations Educational, Scientific and Cultural Organization in building up developing countries' world heritage capacity, according to the extended 44th Session of UNESCO's World Heritage Committee, which was held in Fuzhou, Fujian province.

Tian Xuejun, chairman of the session and director of China's National Commission for UNESCO, announced at a news conference in Fuzhou on Sunday that China will cooperate with UNESCO to establish a new education platform for training professionals in World Heritage conservation.

"The move is to implement the Priority Africa strategy and improve developing countries' expertise in the area," he said.

According to Tian, consensus was reached among countries attending the session to enhance cooperation within a multilateral framework. The Fuzhou Declaration, a joint statement, was passed at the session to highlight world heritage's role in promoting mutual learning among different cultures and sustainable development.

At the opening ceremony of the session on Friday, the Chinese government vowed to provide 100 scholarships for students from developing countries－particularly from African nations and small island states－to nurture expertise in conservation and management of World Heritage sites within the next five years.

"This session provides a crucial opportunity for us to review and reform our working process," Tian said. "We need to solve the problem that the World Heritage Sites from these regions are not representative enough."

He added that it is an international cooperative aim to have a more balanced distribution of World Heritage Sites. Of the 1,121 sites on the World Heritage List, only 96, less than 9 percent, are in Africa.

And conservation and management of the listed sites remain a challenge over the long term.

Tian again rebutted Australia's claim that a proposal to place the Great Barrier Reef on the List of World Heritage in Danger was a Chinese act of political manipulation.

Responding to a reporter's question, Tian said the proposal stems from a professional evaluation by the International Union for Conservation of Nature based on independent research of data provided by Australia, and he urged Australia to enhance protection instead of making accusations.

Tian's explanation was supported by Mechtild Roessler, director of the UNESCO World Heritage Centre. She said at the news conference that the proposal was handed to the World Heritage Committee in accordance with a regular evaluation procedure that has been unchanged for 30 years.

Roessler also called for closer international cooperation among consulting agencies and governments and to prevent the impact of economic and urban development on the outstanding universal value and integrity of the World Heritage Sites.

Sites are inscribed on the Danger List when their outstanding universal value－the characteristics that made them worthy of the World Heritage List－is threatened. Other than the Great Barrier Reef, proposals were made to add several other famed sites to the Danger List, such as the Italian city of Venice and its lagoon and Kathmandu Valley in Nepal, this year.

It was even proposed that the United Kingdom's "Liverpool－Maritime Mercantile City" be removed from the World Heritage List as its outstanding universal value is no longer present. The site was placed on the Danger List in 2012 after new construction interrupted its original skyline.