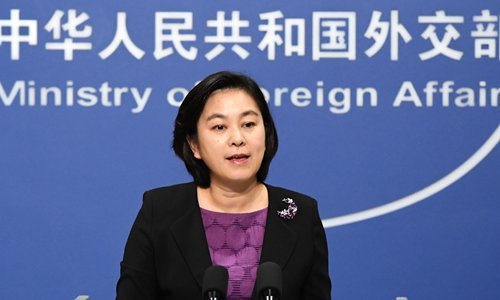 China vows to take resolute and powerful countermeasures against the US' latest sanctions against 14 Chinese senior officials, and strongly urges the US to immediately revoke its wrong decision, Chinese Foreign Ministry spokesperson Hua Chunying said on Tuesday.

The Chinese government and people are strongly resentful and condemn the peremptory, irrational, insane and abominable act, she said.

Hua also stressed that the Hong Kong Special Administrative Region (HKSAR) is part of China and Hong Kong affairs are purely China's internal affairs. "The US has no right to interfere in Hong Kong affairs. The Standing Committee of the National People's Congress (NPC) has enacted the National Security Law for Hong Kong in accordance with the Constitution to promote the governance of Hong Kong in accordance with the law and to fight against criminals, which is entirely within China's sovereign jurisdiction."

"The action exposes the US' sinister intention to interfere in China's internal affairs, destabilize Hong Kong, and hinder China's stability and development, but will only draw the strong indignation of the 1.4 billion Chinese people including Hong Kong compatriots," Hua noted.

China strongly urges the US to immediately revoke its wrong decision and stop interfering in China's internal affairs. China will take resolute and powerful countermeasures against the US' egregious acts, Hua said.

The US Treasury Department announced on Monday that it was imposing sanctions against 14 individuals - all vice chairs of the 13th NPC Standing Committee, over Hong Kong affairs. They include Wang Chen, vice chairman of the NPC, who first officially unveiled the national security law for Hong Kong in May. Other officials included Chen Zhu, Cao Jianming, Ding Zhongli, Imirbaki Arken and Zhang Chunxian. The sanctions aim to block the assets, impose restrictions on individual transactions and bar the officials from entering the US, according to media reports.