To commemorate the 50th anniversary of restoration of China's lawful seat in the United Nations, a forum was held at the Foreign Ministry on Friday, in which Chinese State Councilor and Foreign Minister Wang Yi recalled the support China has received from developing countries in returning to the UN and called for joint efforts between developing countries and the international community in safeguarding multilateralism. 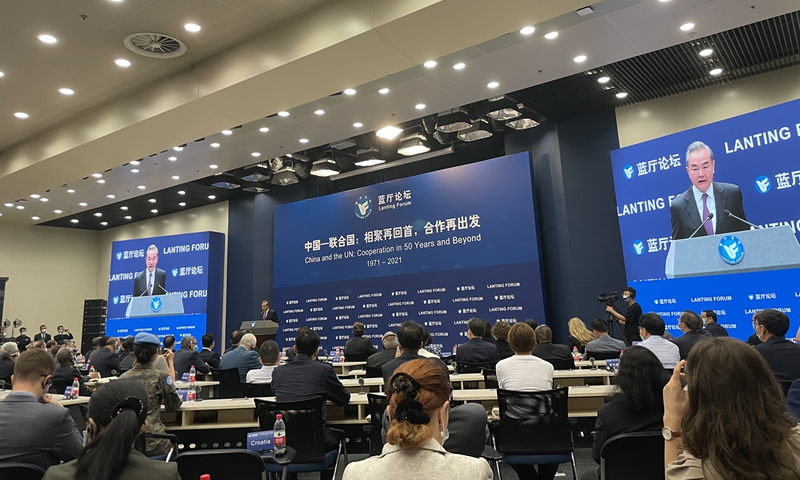 On October 25, 1971, the 26th United Nations General Assembly passed Resolution 2758 with overwhelming vote and recognized the People's Republic of China as the only legitimate representative of China to the UN. This is China's diplomatic victory, and also a victory of global justice and the UN Charter and principles, Wang said in a speech at the forum.
Wang said that when the resolution was passed, many representatives from Asian, African and Latin American countries cheered in support - an exciting and unforgettable scene.
Wang extended gratitude to countries that had made the just move to support China's return to the UN. During the past 50 years, China has also stood firmly with the developing countries.
China has and will always stand with developing countries, Wang said, noting that China's vote in the UN will always belong to developing countries and belong to the side that call for justice.
Aside from extending to countries that had supported China's return to the UN, Wang also reviewed China's active involvement in global activities.
For example, as the largest developing country within the body, China has accomplished the UN's sustainable target on poverty alleviation; China is the first country in the world to instigate urgent humanitarian actions and offer aid and support to combat COVID-19 across more than 150 countries and regions and 13 international organizations.
In order to avoid confrontation in face of profound changes of the global situation that are unseen in a century, Wang said that there is only one right answer to maintain solidarity - safeguarding the international system centered on the UN, and abide by international relations based on the UN Charter and principles.
Foreign ambassadors and diplomats also attended the Friday forum, including Mr. Ahcène Boukhelfa, Ambassador of Algeria to China, and Russian Ambassador to China Andrey Denisov.
Led by Algeria and Albania, a group of countries submitted the proposal to the UN in July 1971 on the restoration of China's lawful seat to the UN.
Ambassador Boukhelfa called it an important diplomatic battle that Algeria and other developing countries have engaged in to restore China's lawful seat at the UN.
The move also laid a solid foundation for not only good bilateral ties but also China's ties with the Africa. African countries need to be engaged in the UN's platforms, which calls for cooperation with China to build a series of systems to let the continent to have the rights that it deserves but had been deprived in the colonial period, said the ambassador.
"Today we commemorate China's return to the UN and tomorrow is the UN Charter Day. On these important days, we can review the UN's significant role in history and in the future. This is meaningful given that some countries are attempting to disrupt international cooperation while more are insisting on an international order centered on the UN," Su Xiaohui, deputy director of the Department of International and Strategic Studies at China Institute of International Studies, told the Global Times on Friday.
China vows to stand with developing countries because developing countries have suffered disproportionately during the COVID-19 pandemic as certain other countries used the pandemic to move forward personal interests and undermined cooperation, Su said, noting that China will provide more assistance to developing countries - for example providing COVID-19 vaccines.