CHINA China vows to create 11m jobs in 2021, back at pre-epidemic level

China vows to create 11m jobs in 2021, back at pre-epidemic level 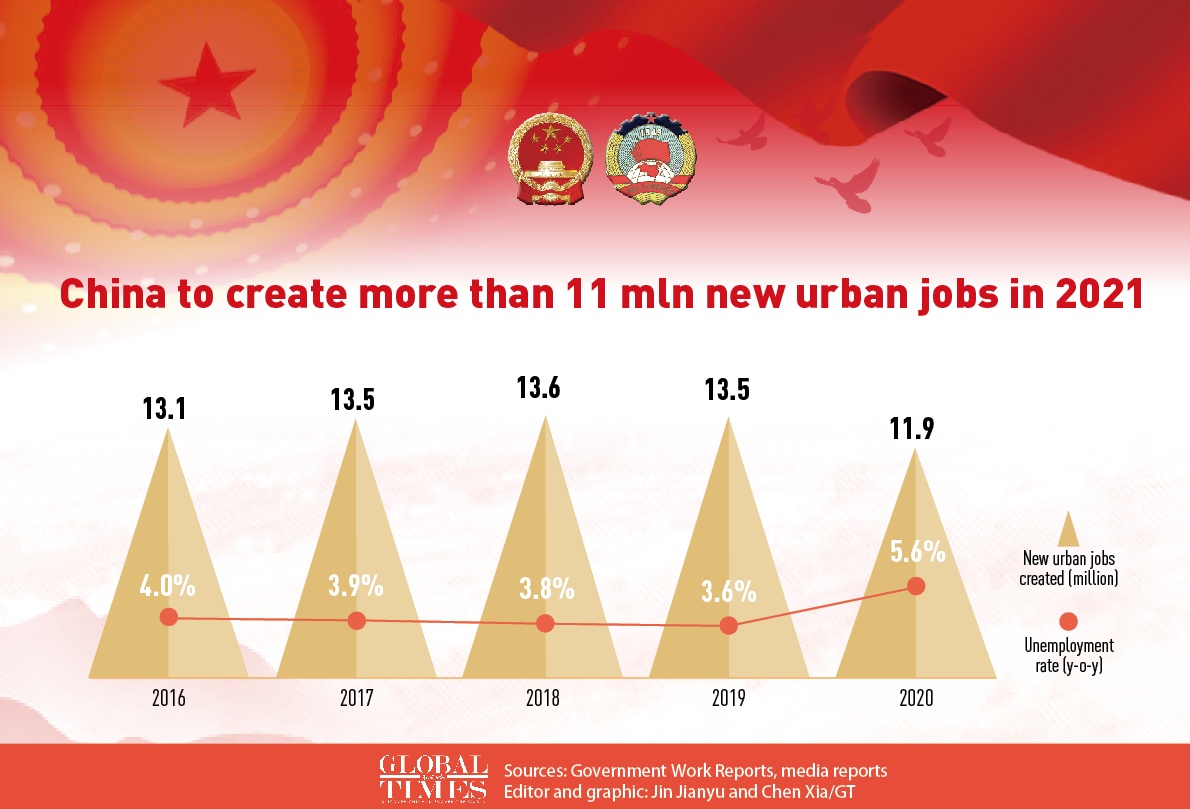 China is planning to create 11 million jobs in 2021, a jump from the 9 million in 2020, which analysts said suggests that the country's job policy will steer toward the post-pandemic era as the COVID-19 situation in the world's second-largest economy is firmly contained.

While officials and economists also pointed out that as the country is expected to have about 15 million new urban workers this year, the challenges in the job market will be more severe than ever.

The job creation target was made in the country's 2021 Government Work Report, which was delivered by Premier Li Keqiang on Friday at the opening of the fourth session of the 13th National People's Congress, China's top legislative body.

"We will continue to improve the employment-first policy to enhance its performance," said Premier Li, adding that the country will work to keep the employment situation stable, provide adequate fiscal, tax, and financial policy support to businesses that do not cut jobs or only cut a small number of them.

The government also vowed to ensure employment for key groups such as college graduates, ex-service members, and rural migrant workers, support the development of new forms of employment and expand the scope of the use of vocational skills training funds.

Analysts said the goal of about 11 million jobs, compared with the 9 million target set for 2020, indicates that China has officially entered the post-epidemic period, and government policy in the employment market will also gradually normalize.

"Due to the complicated situation in 2020, the central government launched a series of special support policies to ease pressure on the job market - for instance, expanding graduate enrollment and civil service recruitment," Li Chang'an, a professor at the University of International Business and Economics' School of Public Administration, told the Global Times.

"However, these policies may gradually be rolled back as China has entered a new development phase, adding to the difficulty for the job market," said the professor.

Guo Wei, vice director of the Research Office of the State Council, said on Friday the 11 million target is the same as the 2019 goal. "As the economy is still in the recovering process, the market situation remains complicated and severe, and various uncertainties are still increasing. To accomplish this goal, the task this year may be very arduous, and even greater efforts are needed," Guo explained.

The pressure on employment this year is unabated, said Zhang Ji'nan, Minister of Human Resources and Social Security, last month.

The number of new hires in 2021 is predicted to be about 15 million, including 9.09 million college graduates, a new high, according to the ministry.

Li Chang'an also warned that uncertainties in the domestic and global markets amid the pandemic will remain major challenges for China's job market.

Generally, the targets, including the GDP and other economic indicators set in the work report this year, are relatively conservative as policymakers are still concerned about the negative impact of the pandemic, Dong Dengxin, director of the Financial Securities Institute at Wuhan University of Science and Technology, told the Global Times on Friday.

The expert noted that the 11 million target could be bolstered by the efficient COVID-19 control mechanism and faster-than-expected economic recovery over the past months.

China's January to February export growth is expected to exceed 50 percent compared with the same period last year, He Lifeng, director of the National Development and Reform Commission, the state planning agency, said on Friday, noting that China's economy has sustained its steady and positive momentum since the fourth quarter of 2020.

There are also encouraging signs in the country's job market. Chinese job hunting platform Zhilian Zhaopin told the Global Times in a statement that regarding the scale of recruitment in the Spring season, 65.1 percent of the interviewed companies said that the scale of recruitment has increased compared with previous years, and 23.3 percent said it remains unchanged.

It also observed that during this Spring Festival holiday, the number of corporate recruitment positions increased by 92.8 percent compared with the same period in 2020, and the number of resumes delivered increased by 68.7 percent.

Corporate recruitment during the Spring Festival this year was also more active than in 2019, with the number of job postings and resume deliveries increasing by 26.4 percent and 8.6 percent, respectively, said the platform.