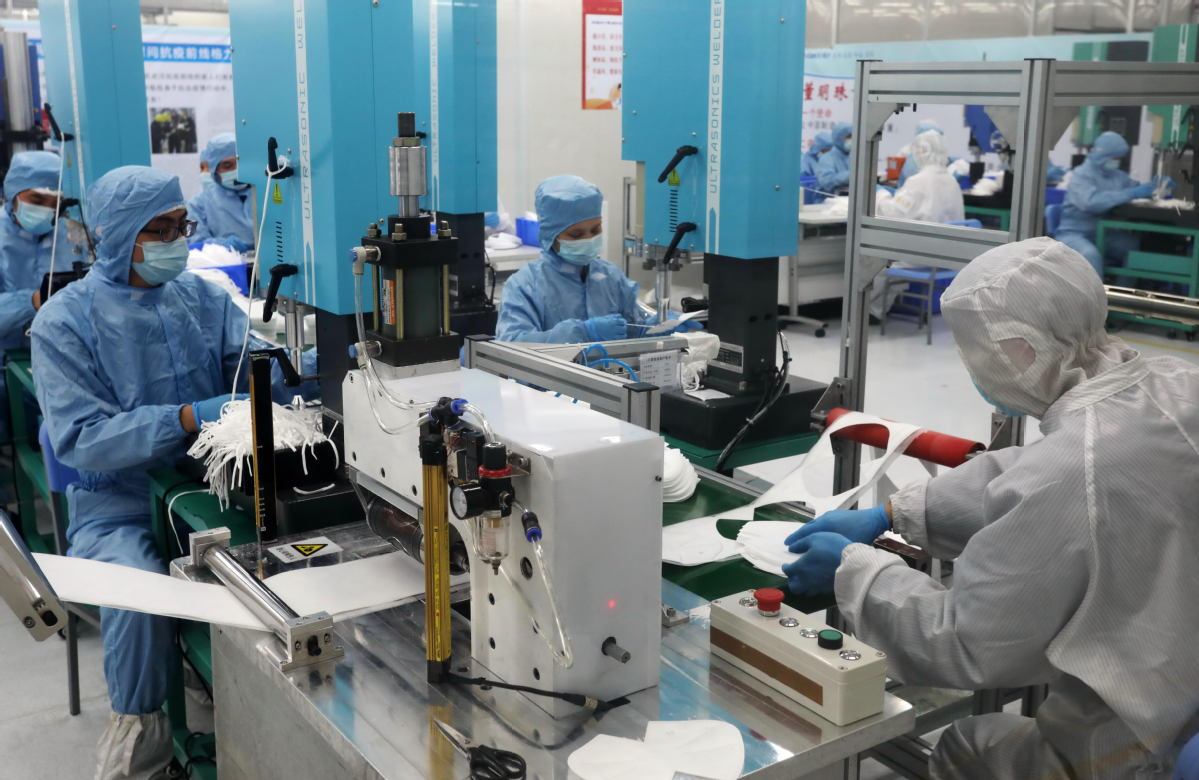 China pledged continued support to facilitate foreign purchases of protective materials and equipment for combating COVID-19, vowing on Tuesday to maintain the stability of global industrial chains with other countries.

"As Chinese companies resume work and production, they will provide more materials to support global society to help others deal with the pandemic," Foreign Ministry spokeswoman Hua Chunying said at a news conference in Beijing.

A similar message was conveyed by State Councilor and Foreign Minister Wang Yi on Monday to Emmanuel Bonne, diplomatic counselor to French President Emmanuel Macron on Monday via phone.

Wang said that China will keep its anti-epidemic material exports open to the rest of the world, even though domestic demand is still great.

China believes that by helping other countries get past the pandemic, it is also helping itself, according to a news release on the Foreign Ministry's website.

So far, 30 countries and two international organizations have signed agreements with Chinese exporters to purchase products including face masks, protective suits and nucleic acid testing reagents, according to Hua.

"Many other countries are in talks with Chinese companies over purchases," she said.

In addition, Hua said that local Chinese governments have donated such materials to more than 50 countries through sister city channels, and Chinese enterprises have made donations to more than 100 countries and international organizations.

During his conversation with Bonne, Wang also underlined that the appeal for worldwide solidarity over the COVID-19 pandemic made by the Chinese and French heads of state during the just concluded G20 Extraordinary Leaders' Summit has injected significant vitality into global anti-epidemic cooperation.

Faced with the pandemic, the international community should boost its confidence that the virus will be defeated and increase cooperation to deal with it, he said.

According to Wang, the fight against the virus once again demonstrated that all countries are living in the same global village with a shared future.

The top priority now is to comprehensively implement the important consensus reached at the special G20 summit, he added.

For his part, Bonne said France strongly agrees with China that the international community should be united and enhance coordination to jointly overcome the rapidly spreading pandemic.

The French side appreciates China's donations of anti-epidemic supplies and hoped that China will continue to provide convenience for France's commercial purchases of anti-epidemic equipment from the country, he said.

As COVID-19 engulfs Europe, China sympathizes with what the people from Portugal and Luxembourg are going through, he said, adding that China also thanked both countries for the support it had received previously from them.

Both Silva and Asselborn spoke positively of China's progress in preventing the pandemic spread and said they hoped that China will continue to support their countries in purchasing Chinese-made materials and equipment for epidemic control.