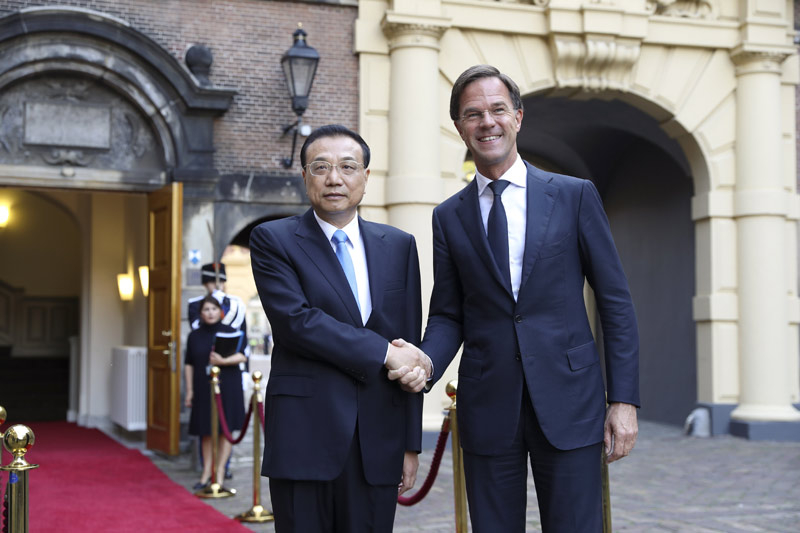 Chinese Premier Li Keqiang said on Monday that China is willing to work with the Netherlands to safeguard multilateralism and free trade through more open and pragmatic cooperation.

Premier Li made the remarks during talks with Dutch Prime Minister Mark Rutte in The Hague.

Li noted that China will make it known worldwide that China, the Netherlands and the rest of Europe, are committed to safeguarding the rule-based international order to promote trade and investment liberalization and facilitation.

Speaking of the reform of the World Trade Organization (WTO), Li said China will strengthen communication with the Netherlands in this regard, and the WTO reform should adhere to the principle of maintaining free and open trade, safeguard the rights and interests of developing countries, and narrow the gap between the North and the South.

We should stick to the principle of consensus and must not engage in exclusivity and small circles, he added.

Li went on saying that China will further deepen reform and open up and explore all-round cooperation with the Netherlands.

"China welcomes Dutch enterprises to expand investment in China and share the profits brought by China's new round of reform and opening up," Li underlined.

He also said China will learn from the Dutch experience in dealing with an aging society, elderly care and clean energy.

Rutte, for his part, said the Netherlands is willing to work with China to explore new cooperation potential in the fields of circular economy, urbanization and smart cities, and jointly safeguard rule-based multilateralism and free trade systems.

After talks, the two witnessed the signing of cooperative papers in trade, finance, energy, agriculture and so on.

Li also attended a press conference with Rutte, saying that China is willing to work together with the Netherlands to face the challenges of unilateralism, climate change and aging population.

He added that China is ready to join hands with the Netherlands to face challenges for mankind too, for example, climate change and aging population.

"Of course, we can take differentiated efforts. China will continue to honor the Paris Agreement to fight climate change with the international community, which is also in line with our own development.," he said.

On aging population, we will further open up our service market and expand cooperation, he explained.

Differences are not terrifying. Dialogue is the way to reduce differences. Our similarity and common interests are far bigger than differences, underlined the premier.

Earlier in the day, a welcome ceremony was held in The Hague for Li.