China, the world's largest express delivery market, has been waging a war against waste produced by delivery services through tougher regulations and environmentally friendly packages, according to the country's postal authority. 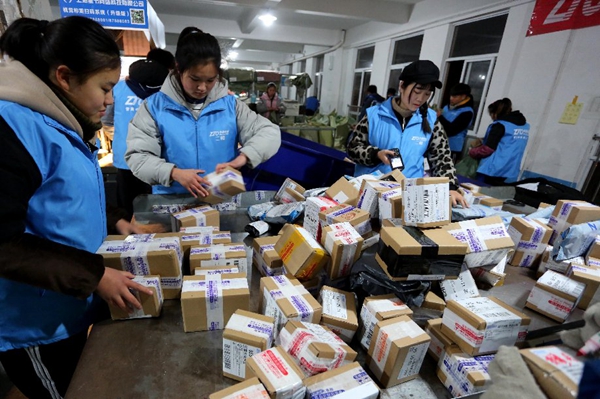 Over 50.7 billion parcels were delivered last year by express delivery, accounting for more than 50 percent of the world market.

The average annual growth of the express delivery industry stood at 41.5 percent over the past 30 years, said Ma Junsheng, head of China's State Post Bureau.

"The total number of express deliveries will without any doubt top 60 billion this year," he said at a news conference at the State Council Information Office on Tuesday. "Such great numbers of parcels create much convenience, as well as a lot of packaging waste."

The current standard includes recommendations for packaging material that is not effective enough, so the bureau is drawing up a tougher regulation targeting green logistics to reduce plastic pollution, he said.

"So far, 96 percent of the courier deliveries have adopted digital waybills, and 12,000 waste sorting devices have been deployed in courier service branches nationwide," he said, adding that 45 percent of products sold on e-commerce platforms no longer use secondary packaging.

But the express firms still fell short of using recycled environmentally friendly packaging. The bureau has required 70 percent of its packaging materials to be renewable by the end of this year, up from only 44 percent now.

Liu Jiang, a researcher with the Development and Research Center of the State Post Bureau, said that although China has a huge market share and rapid growth that outperforms its counterparts around the world, it is still lagging in terms of green logistics services.

"But many delivery companies were caught in the dilemma of high costs and low margins," he said. "Lack of funds made it difficult for them to handle the problem alone. This led to the cooperation of enterprises in the industrial chain such as the e-commerce platform."

By the end of last year, 95 percent of the townships across China had delivery service outlets. The sector raked in 1.2 trillion yuan ($175 billion) of revenue in 2018.