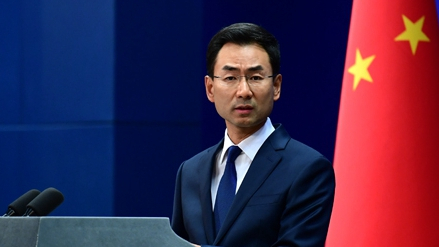 He urged other external parties to think twice before making any moves in the area to avoid actions that could potentially hurt the peace and stability of the South China Sea region.

Geng made the remarks when responding to questions over Japanese submarine's recent naval drill in the area.

The submarine Kuroshio took part in an exercise on Thursday with other Japanese warships, including the Kaga helicopter carrier, which is on a two-month tour of Southeast Asia and the Indian Ocean.

This was the first time a Japanese submarine had conducted drills there, including moves like detection evasion, Reuters reported.

"The situation in the South China Sea area is moving toward the positive side," Geng said.

China and the member states of the Association of Southeast Asian Nations (ASEAN) are currently under negotiations over a Code of Conduct in the region, to further strengthen practical maritime cooperation.