China warned the UK not to interfere in China’s internal affairs, and to stop pointing fingers regarding the storming of the legislature in Hong Kong. 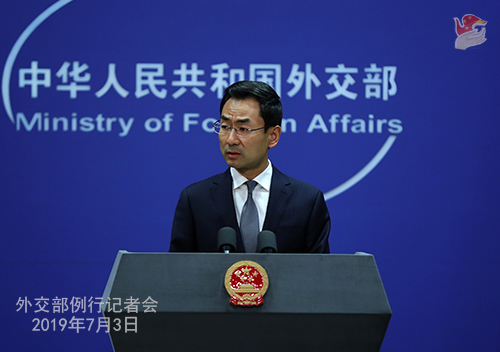 In a recent comment, UK Foreign Secretary Jeremy Hunt said that Britain’s commitment to the Sino-British Joint Declaration was “unwavering,” and Britain will stand behind the people of Hong Kong in defense of the freedoms “that they negotiated for them when they agreed to the handover in 1997.”

“Mr Hunt seems to be immersed in the illusion of the former British colonists, still obsessed with the habit of pointing a finger and looking down on other countries' affairs with wanton criticism,” Foreign Ministry spokesperson Geng Shuang said at a routine press briefing on Wednesday. He expressed China’s strong dissatisfaction and resolute opposition to Hunt’s opinions, which he has responded to for two consecutive days.

When Hong Kong returned to China on July 1, 1997, the UK’s rights and obligations stipulated in the declaration have all been completed. The UK has no sovereignty, no power to rule and no power to supervise Hong Kong after the reunification, so there’s totally no so-called responsibility, Geng stressed.

“It’s totally shameless to say that it was Britain that gave Hong Kong residents their civil rights,” Geng said. “May I remind Mr Hunt that during the British colonial rule of Hong Kong, Hong Kong people did not even have the right to demonstrate in the streets.”

It’s the Chinese government that provides Hong Kong people unprecedented rights and freedoms, said Geng. In accordance with China's Constitution and the Basic Law, the principles of "one country, two systems" and "Hong Kong people administering Hong Kong" with a high degree of autonomy have been successfully implemented.

The storming on July 1 was a serious illegal act that trampled on the rule of law and endangered social order, Geng reiterated. Hunt ignored the facts and said that the SAR government "repressed" the protest, which is completely confusing right and wrong.

“If the storming of the legislature happened in the UK instead of Hong Kong, how would it have been dealt with? Will the UK police let the protesters have their way and enter parliament? If Mr Hunt thinks this is democracy, does he think of the way British police handled the London storming in August 2011 as a crackdown?” Geng asked.