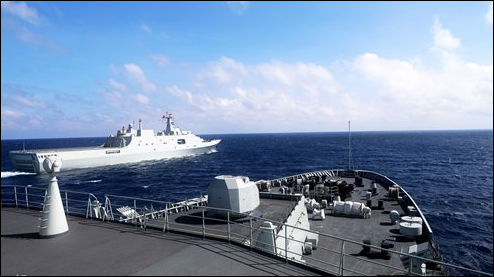 The amphibious dock landing ships Changbaishan (Hull 989, R) and Wuzhishan (Hull 987, L) attached to a landing ship flotilla with the Navy under the PLA Southern Theater Command steam in formation in waters of the South China Sea during a three-dimensional amphibious landing operation from May 29 to June 3, 2019. (Photo: Global Times)

Chinese officials and experts slammed the transit of a US warship Wednesday through the Taiwan Straits, calling it a provocation timed to coincide with the release on the same day of China's new national defense white paper which identified the opposition and containment of "Taiwan independence" as part of the Chinese military's fundamental goal.

The timing could mean the US is sending a high-profile signal to pressure China amid escalating tensions between the two countries, but this will only incite Taiwan secessionists, worsen the cross-Straits security situation and further damage China-US relations, analysts said while emphasizing that there is zero possibility that China will make any concessions when it comes to the Taiwan question.

"The Chinese side has been closely monitoring from start to end the passage by the US warship through the Taiwan Straits. We have raised concerns to the US side," Foreign Ministry spokesperson Hua Chunying said at a daily briefing on Thursday.

"The Taiwan question is the most important and sensitive one in China-US relations. We urge the US to observe the one-China principle and the three China-US joint communiqués and prudently and properly handle Taiwan-related issues so as to avoid negative impacts on China-US relations and peace and stability across the Taiwan Straits," Hua said.

The USS Antietam, a Ticonderoga-class guided missile cruiser, conducted a routine Taiwan Straits transit from Wednesday to Thursday, CNN reported Wednesday, citing a statement by Clay Doss, a spokesman for the US Navy's Seventh Fleet.

This is the sixth time the US has sent warships through the Taiwan Straits this year, and the latest passage coincided with China's release on Wednesday of its latest national defense white paper China's National Defense in the New Era.

One of the aims of China's national defense is to oppose and contain "Taiwan independence," according to the paper.

The People's Liberation Army (PLA) will resolutely defeat anyone attempting to separate Taiwan from China and safeguard national unity at all costs, it said.

"If anyone dares to try to separate Taiwan from China, the Chinese military will not hesitate to go to war to resolutely safeguard the country's sovereignty and territorial integrity," Defense Ministry spokesperson Wu Qian stressed at a press conference on Wednesday.

Li Jie, a Beijing-based naval expert, told the Global Times on Thursday that the US is intentionally provoking China, showing off to people, including Taiwan secessionists, that despite the white paper's declarations, the US is still capable of challenging China.

While the timing of the US warship's transit through the Taiwan Straits and the white paper's release might actually be a coincidence, it remains clear that Washington has doubled down on its support for Taiwan in its strategic game with Beijing, Ni Feng, deputy director of the Chinese Academy of Social Sciences' Institute of American Studies, told the Global Times on Thursday.

By calling the transit a "routine" move, the US expects to avoid a strong response from China, but in fact, such moves will leave an impression that the US is continuing to take a strong stance against China, they said.

The US move might further embolden Taiwan secessionists, which will further destabilize cross-Straits relations, Li said. The US seems not to care about overall relations between China and the US, he said.

Ni noted that by frequently sending naval vessels through the straits, the US is reneging on its promise to China made when the two countries established diplomatic relations, shaking the very foundation of China-US relations.

Neither the Taiwan secessionists nor the US will see the outcome they desire, as the island of Taiwan is and will always be part of China, analysts said.

Some Taiwan internet users are also tired of the frequent presence of the US warships, with one posting on Facebook that the US was "struggling for a sense of presence."

"The US is baring its fangs and showing its claws, but there is nothing there, really," read another comment from a Taiwan net user.

After the US approved a plan to sell $2.22 billion worth of arms to the island earlier this month, China's Defense Ministry announced a military drill near the southeast coast of the Chinese mainland which was widely interpreted as a response to the US' action and a warning to Taiwan secessionists.

To respond to the latest US warship transit through the Taiwan Straits, PLA drills in this direction could become even larger and more complex, analysts suggested.

"The drills could be big and could include an amphibious landing exercise with the island of Taiwan's terrain and landforms in mind," Li said.

In addition to the landing ships and amphibious equipment used in regular landing mission drills, rockets and missiles of the Rocket Force, fighter jets and helicopters, as well as electronic warfare installations could be deployed, Li predicted.

It could be a coordinated joint operation exercise, as in case the mainland really needs to resolve the Taiwan question by force, it is unlikely to involve only one military branch, Li said.