CHINA China weighs in on the 90th Academy Awards

China weighs in on the 90th Academy Awards 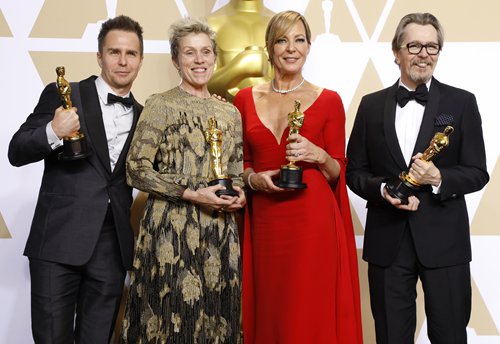 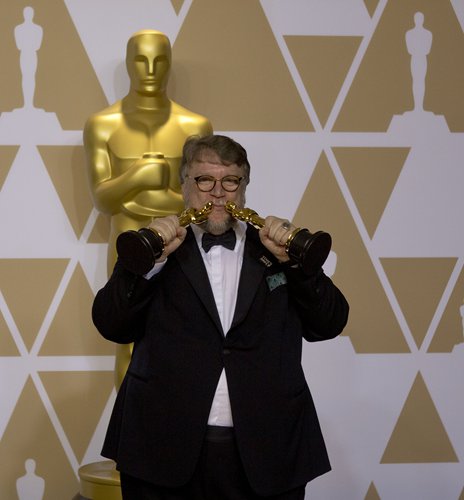 Although the 90th Academy Awards were not broadcast live in the Chinese mainland this year, that didn't stop movie fans in the country from following the event online and falling into heated debates on social media platforms about every bit of news that hit the Internet. Opinions ranged far and wide concerning the major awards such as best actor, with the most controversy arising around Guillermo del Toro's The Shape of Water taking home the award for best picture. Chinese responseMany moviegoers were ecstatic about many of the major acting awards. The news that Sam Rockwell snapped up the best supporting actor award for Three Billboards outside Ebbing, Missouri quickly earned thousands of likes and reposts within minutes of appearing on Sina Weibo."He totally deserves it!!! After watching the film on Saturday, I told everyone that he would definitely be awarded best supporting actor at the Oscars," wrote Sina Weibo user Li Chengji on Monday.Debuting in the Chinese mainland on Friday, Three Billboards doesn't seem to appeal to the general audience in the mainland compared to its other imported competitor Peter Rabbit, which debuted that same day. Three Billboards has earned only around 16 million yuan ($2.37 million) as of Monday noon, while Peter Rabbit has pulled in 81 million yuan. However, Three Billboards certainly seems to have gained a following among those who have seen the film, as it has a relatively high rating of 8.7/10 on Chinese media review platform Douban.Moving over to best actor, Chinese fans of 23-year-old US actor Timothée Chalamet, the youngest nominee for the award in the past eight years, were thrilled when he appeared at the red carpet ceremony. Tiancha (Sweet Tea), as Chalamet's fans call him in Chinese, quickly became one of the most-searched hashtags on Sina Weibo on Monday. Chalamet's 2017 film Call Me By Your Name, winner of this year's Oscars' best adapted screenplay, caused quite a stir among Chinese movie fans, even though it did not come out in the mainland."Showing a delicate, intimate relationship and a love that cares little about sexual orientation, the film was definitely one of the most discussed films in Chinese movie fan circles in 2017," Chinese film critic and screenwriter Lin Chudong, known by his pen name Uncle Andres, told the Global Times. Another Chinese favorite that was a big winner that night was Pixar's Coco, which took home best animated feature film. The film grossed an impressive 1.2 billion yuan in the Chinese mainland in late 2017 to become the highest-earning Pixar film ever in China.Grabbing four awards on Monday, The Shape of Water is set to hit Chinese mainland theaters on March 16. While the film has passed review by mainland censors, movie fans in China are still unclear how much of its R-rated content, which includes violence and nudity."It is classic Del Toro, a dark adult fairytale featuring classically beautiful cinematography," Li said. "But the violence and sex scenes as well as certain Cold War-related parts of the film may have to be removed for Chinese mainland viewers."Best Picture dispute Whatever form the film may take when it debuts in the Chinese mainland, The Shape of Water has already stirred up controversy in the country before it has even arrived by winning the best picture Oscar. This dismayed many Chinese film lovers and critics who were pulling for Three Billboards to take the trophy. "I'm really feel sorry that Three Billboards didn't win best picture or original screenplay, though I understand that The Shape of Water is more politically correct as it shows concern for a marginalized group in society through a fancy and creative love story," Cai Yucheng, a film critic and industry professional, told the Global Times on Monday. Her opinion was echoed by many in Chinese film circles. Donald Li, a Chinese director who graduated from California State University, was also pulling for Three Billboards over The Shape of Water, but indicated that the academy made the right choice given the current social context. "Oscar standards have become more moderate amid all the uncertainties that exist at this time. For example, the uncertainty brought about by [US President] Donald Trump, Hollywood's Time's Up movement, et cetera. The value system is restructuring and the academy has become noncommittal," Li told the Global Times, explaining that a fairy tale movie like The Shape of Water can be considered a "safe" choice. However, Chinese netizens and filmgoers seemed to show less understanding about the results, with many calling for justice for Three Billboards on social media. "Best picture goes to The Shape of Water!! I can't accept this!" netizen Fazhangtiao_DianyingzuiTop posted on Sina Weibo. The comment received hundreds of likes with some others responding, "Wait for five minutes, it might change," a dig at last year's Oscars mix-up when La La Land was mistakenly announced as best picture winner instead of Moonlight. The favor for Three Billboards over The Shape of Water can be seen in the ratings for both films on Douban, where the former has an 8.7/10 and the latter a 7.4/10.  However, it should be noted that there are currently only 62,169 reviews for The Shape of Water compared with 131,649 reviews for Three Billboards since the former hasn't hit theaters in the Chinese mainland yet, so these ratings might change as more of the general audience gets to see the picture.