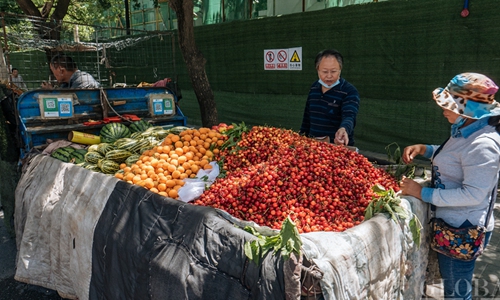 Many street peddlers in Beijing are back in business after a number of places have loosened their controls on the private stall economy. But to keep their business running, some fruit sellers have had to play "hide and seek" with urban management officers, because an old fixed open-air market was demolished. (Photos: Global Times)

China is loosening grip on street vendors after years of restricting the sector as it seeks to boost employment in the wake of Covid-19 epidemic. Experts hail the move, deemed a game-changer for low-income and unemployed people, with as many as 100 million jobs to be created.

Top government leaders have recently signaled an inclusive attitude toward street vending. During a press conference after the closing of the National People's Congress, the legislature, Chinese Premier Li Keqiang cited the example of a city that generated 100,000 jobs overnight by setting up 36,000 mobile vendor stalls.

The Central Civilization Committee office also said on Wednesday it wouldn't include street vendors who occupy outdoor spaces or other public areas in city assessment program for 2020, indicating a temporary relaxation on management of the street peddling sector.

China imposed tight management on street vending in recent years to make its cities more attractive. But the new welcome comes as China's job market has sustained a blow from the coronavirus attack, as business closures and shrinking overseas demand have caused many people, particularly self-employed workers, to lose their jobs.

Song, a 59-year-old street vendor in Beijing, said that it would be good if support policies for street vendors were put in place. "I feel that mobile stalls should be allowed, since if a small cart is used, it won't affect road traffic, and people can get things cheaper than in bigger stores," Song said.

Song has spent 30 years selling fruit and vegetables on the street. In his village in Henan Province, there are hundreds of people like him. They weren't able to go out to do business during the virus outbreak, but they believe that street vending can help them make up economic losses, he told the Global Times.

Tian Yun, vice director of the Beijing Economic Operation Association, told the Global Times on Sunday that the street economy is a game-changer for lower-income people and the unemployed.

According to Tian, because of the pandemic, many small shops shut down because they couldn't pay rent because customers dried up. Also, many companies don't hire people over 40 years old. Street vending can offer opportunities to them.

He predicted that once the restrictions on street businesses are lifted, agricultural produce markets, small commodity markets and morning markets will create at least 100 million jobs.

"Last year, one point of GDP growth was estimated to have generated about 2 million jobs. Assuming that there are 5 to 6 million new street stalls this year, it can be equivalent to about 2-3 percentage points of GDP growth," he said.

Li Guoping, head of the Beijing Development Institute under Peking University, said that local governments should determine where and how the street vendors should do their business, based on factors such as transportation and sanitary conditions, instead of allowing street vending all at once without proper management.

"It will make urban management more difficult, but local governments have to bear the pressure instead of just seeing the economy slide," Li told the Global Times.

Ye Hang, an economics professor at the College of Economics at Zhejiang University, said that with the boom of the so-called "informal" job market like courier delivery and live streaming, the government should launch policies to prop up the sectors as a way of solving unemployment, instead of relying on traditional methods such as requiring state-owned companies to increase recruitment.

He also noted that urban management officials should help street vendors do their jobs in accordance with relevant urban regulations, such as offering them cleaning tools to make sure that streets aren't littered.