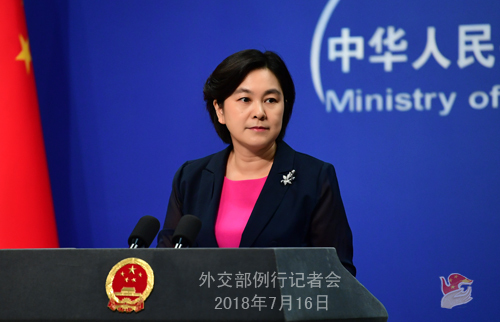 Hua made the remarks at a press conference, commenting on the first official face-to-face meeting between US President Donald Trump and Russian President Vladimir Putin in Helsinki.

She said China welcomed the meeting between the heads of state of Russia and the United States.

"China hopes that the two sides will strengthen communication and expand cooperation, which is conducive to the cause of world peace and development and will help the international community to jointly meet common challenges."

Asked whether the meeting would affect China-Russia or China-US ties, Hua said China was "full of confidence in the China-Russia comprehensive strategic partnership of coordination and the Sino-Russian relations will not be affected by any external factors."

"Our position on developing Sino-US relations has also been clear and consistent."

Trump and Putin started their first bilateral meeting on Monday in Helsinki, where they agreed to cooperate on conflict in Syria, terrorism and nuclear disarmament