China welcomes the defense departments of China and Japan to strengthen communication and exchanges, China’s Ministry of Foreign Affairs spokesperson Hua Chunying said at a routine press briefing on Wednesday. 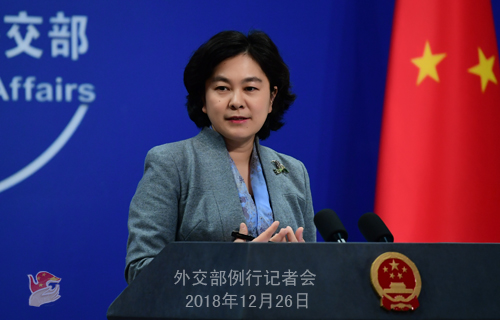 Hua made the remarks when asked to comment on reports that Japan’s Ministry of Defense was considering sending Maritime Self-Defense Force vessels to the fleet review in China, which will be held in Qingdao, East China’s Shandong Province, in April to mark the 70th anniversary of the foundation of the Chinese navy. It is also said that Japan may invite Chinese vessels to the Japanese navy fleet review in the autumn of next year.

Hua said that the defense relationship is always an important part of China-Japan relations. The communication and exchanges between the defense departments of the two sides will help to properly handle and resolve differences, increase mutual trust of security and promote constructive bilateral security relations.

This year marks the 40th anniversary of the signing of the Treaty of Peace and Friendship between China and Japan. Exchanges between the two sides will make a positive impact in the continuous improvement and the long-term, healthy and stable development of China-Japan relations, said Hua.