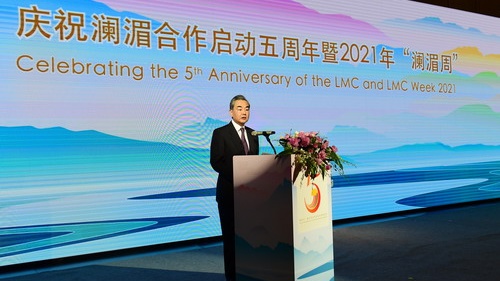 Chinese State Councilor and Foreign Minister Wang Yi delivers a speech at a reception on the fifth anniversary of the establishment of the Lancang-Mekong Cooperation (LMC), April 13, 2021. (Photos: Chinese Foreign Ministry)

China will work with Mekong countries to continue to promote the Lancang-Mekong Cooperation (LMC), strive to create a new model of regional cooperation, and build a new highland of development and prosperity, said Chinese State Councilor and Foreign Minister Wang Yi on Tuesday in a speech delivered at a reception on the fifth anniversary of the establishment of the LMC.

Wang said the LMC mechanism had brought tangible benefits to the people of all LMC countries.

The six LMC countries absorbed resources from all sides, focused on pragmatic cooperation and reached fruitful results. They also did a lot to benefit the people, carried out regional governance and maintained the peace and stability of the region.

Amid the pandemic, the countries have supported over 500 projects in several areas, such as education, health, women's cause and poverty alleviation, he said, adding that they also joined hands in addressing challenges, such as floods, droughts, climate change and non-traditional security. 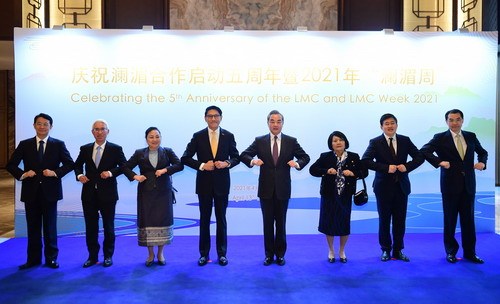 Chinese State Councilor and Foreign Minister Wang Yi (R4) in a reception on the fifth anniversary of the establishment of the Lancang-Mekong Cooperation (LMC), April 13, 2021.

In 2020, the trade volume between China and the LMC countries reached $322.1 billion, an increase of 66.3 percent from the figure five years ago, and more than 17 million doses of vaccine have been delivered or will be delivered to the LMC countries, according to Wang.

Wang said China is speeding up efforts to foster a new development paradigm, and the LMC is facing new opportunities.

With the aim of building a community of shared future, the six LMC countries should adhere to the spirit of partnership to jointly seek ways for development, he said.

Calling for efforts to adhere to interconnection to build an engine for development, he also highlighted the importance of promoting the joint construction of the Belt and Road. He added that efforts are needed in innovation to promote coordinated development of the real economy and the digital economy.

Wang also called for putting people's livelihood first to consolidate the foundation for development and expand cooperation in education, tourism and youth-related areas.