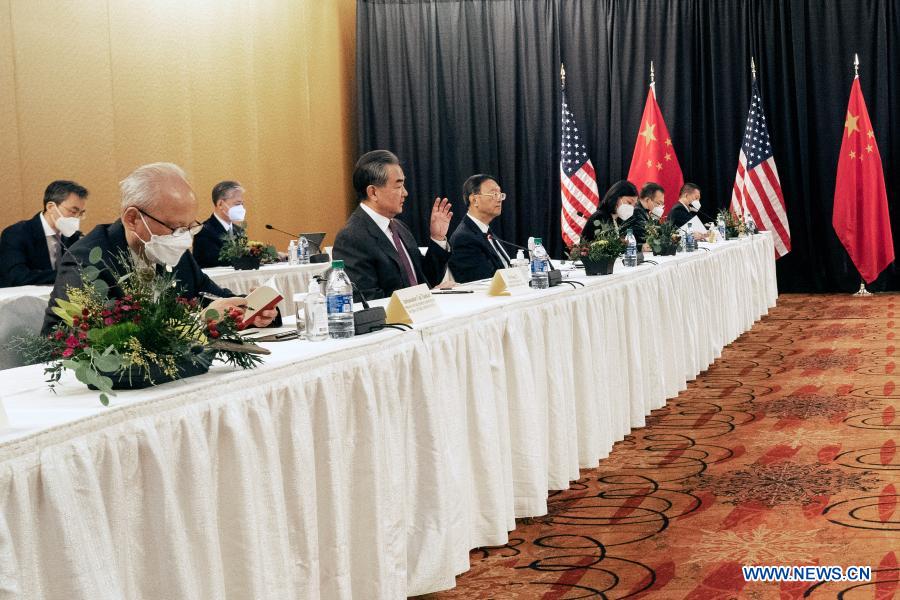 Chinese State Councilor and Foreign Minister Wang Yi puts forward China's stands on relevant issues at the start of the high-level strategic dialogue with the United States in the Alaskan city of Anchorage on March 18, 2021. (Photo: Xinhua)

The United States should quit its old bad habit of hegemonism and completely abandon its overbearing behavior of interfering in China's internal affairs, Wang said at the start of a high-level strategic dialogue with the United States in the Alaskan city of Anchorage.

Noting that Anchorage is located in the middle of the air route between the capitals of China and the United States, Wang called the city a "gas station" for China-U.S. exchanges and an "intersection" for the two countries to meet each other halfway.

In the past few years, due to the irrational suppression of China's legitimate rights and interests, China-U.S. relations have encountered unprecedented difficulties, Wang said, adding that this situation has harmed the interests of the two peoples as well as stability and development of the world, and should stop.

He said the U.S. escalation of sanctions on Hong Kong-related issues on March 17 is a gross interference in China's internal affairs, which has aroused strong indignation among the Chinese people.

It is not a normal way of hosting guests that the United States introduced the sanctions on the eve of the Chinese side's departure for the dialogue, Wang said.

If the United States wants to enhance its so-called advantage over China through the act, it has totally miscalculated as this just exposes the inner weakness and powerlessness of America, the Chinese official said.

This practice will not at all affect China's legitimate position, nor will it shake the firm will of the Chinese people to safeguard sovereignty and dignity of the nation, he added.

Wang said that since the U.S. side mentioned in opening remarks that some countries believed that China coerced them, it should clarify whether such a claim came from those countries or America's own assumption.

If the United States is partial to some countries just because they are its allies, or even takes sides with their wrong words and deeds, it will be difficult for a smooth development of international relations, Wang added.

Emphasizing that the phone conversation between Chinese President Xi Jinping and U.S. President Joe Biden on the eve of the Chinese lunar new year is very important, Wang said the consensus reached by the two heads of state has guided the direction for China-U.S. relations to get back on track.

The international community is paying close attention to the Anchorage dialogue over whether China and the United States can truly show sincerity and goodwill, and whether the two sides can send out positive signals to the whole world, he said.

If the U.S. side is willing, China can work with the United States to exchange views on the basis of mutual respect, take on their responsibilities, and deliver on the tasks they are given, Wang added.

Yang Jiechi, a member of the Political Bureau of the Communist Party of China (CPC) Central Committee and director of the Office of the Foreign Affairs Commission of the CPC Central Committee, as well as Wang, are attending the two-day high-level strategic dialogue with U.S. Secretary of State Antony Blinken and U.S. National Security Advisor Jake Sullivan.