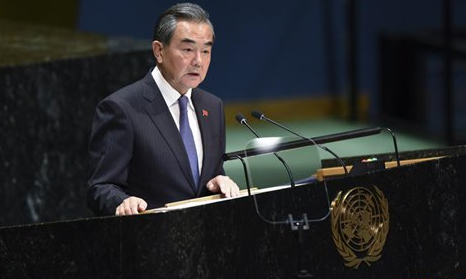 Chinese State Councilor and Foreign Minister Wang Yi (C) addresses the General Debate of the 74th session of the UN General Assembly at the UN headquarters in New York, on September 27, 2019.  (Photo: Xinhua)

China will never pursue hegemony or seek expansion and the country will remain committed to the basic principles of sovereign equality and non-interference in other countries' internal affairs, said Chinese State Councilor and Foreign Minister Wang Yi.

Wang delivered a speech on Friday at the General Debate of the 74th session of the UN General Assembly, covering a wide range of issues from development to protectionism and unilateralism, global peace and justice and climate change, the Xinhua News Agency reported on Saturday.

"During the previous 70 years, we Chinese have changed our destiny through tireless efforts," Wang said, noting that this year marks the 70th anniversary of the founding of the People's Republic of China.

On the diplomatic front, China has traversed tests and challenges and "has remained true to our original purpose," he said.

China is guided by the principle of independence, believes in equality among nations, stands for justice and pursues mutually beneficial cooperation, noted the top diplomat.

China will insist on seeking an independent foreign policy of peace, Wang said, adding that peaceful development, which has long been incorporated in China's Constitution, is the cornerstone of China's foreign policy. "We will neither submit ourselves to others nor coerce others into submission."

The global interaction comes at a time when the world needs to take a more precise and objective view on China thanks to the increased influence of the country, Li Haidong, a professor with the Institute of International Relations at the China Foreign Affairs University, told the Global Times on Saturday.

Wang's speech served to reveal that China's growth will bring opportunities to other countries as it firmly believes in peaceful development and aims to pursue reciprocal cooperation with the world, Li said.

During the past 70 years, China's foreign policy has gradually featured an "increasingly active and constructive role in contributing to the international community," Li said, adding that China, at present and in the future, maintains its basic objective to actively participate in handling major issues in regional and global communities.

The world today is not a peaceful place, as unilateralism and protectionism are posing major threats to the international order, Wang said, underscoring China's readiness to work with other parties to fulfill its responsibilities as a major country to uphold global peace and justice.

As challenges arising across the world, amid the US-initiated trade war with China, China is expected to insist on its opening-up policy and further promote liberalization of trade and investment, Zhao Jinping, an expert from the Development Research think tank of China, told the Global Times.

Protectionism and economic nationalism are not in the common interests of most countries in the world, and such options often bring more fierce disputes and conflicts, experts said, noting that China and the world need to strengthen joint efforts to uphold multilateralism and advance globalization.

China is expected to strengthen cooperation with other countries to advance the reform of the global governance structure, moving it in a better direction, Zhao noted.