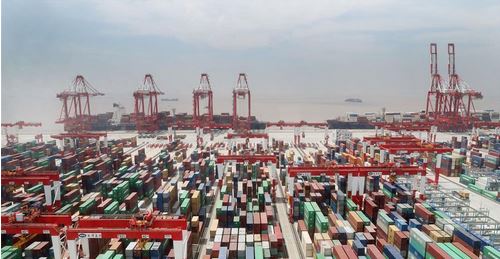 BEIJING, May 14 (Xinhua) -- China will never surrender to external pressure and has the resolve and capability to defend its legitimate rights and interests, Foreign Ministry spokesperson Geng Shuang said here Tuesday.

Geng made the remarks at a press briefing in response to questions regarding China-U.S. trade frictions.

"China doesn't want a trade war, but we are not afraid of fighting one. If someone brings the war to our doorstep, we will fight to the end," he said.

Geng also said China is by no means the party that had pulled back and broken its promise.

U.S. President Donald Trump accused China of pulling back on some of the promises when a deal between the two countries was "95 percent" done.

The negotiation is the process of discussion, and it is quite normal that the two sides hold different opinions during this process, said Geng, adding that before the negotiation is concluded and an agreement is reached, there is no such saying as "violating promises."

He said the two sides reached multiple consensuses on economic and trade issues and released a joint communique in Washington in May last year. However, the U.S. side abandoned those consensuses in just a few days.

The two sides also reached consensus on the value of Chinese purchases of U.S. goods last December, but the U.S. side deliberately raised the asking price in subsequent negotiations, said Geng, adding that China is by no means the "backtracking" side.

"China has shown the greatest sincerity and kindness during negotiations with the United States," said Geng, expressing the hope that the two countries can meet each other halfway and achieve a mutually beneficial and win-win agreement on the basis of mutual respect, equal treatment and commitment.

According to reports on Monday, the United States will hold a public hearing on June 17 on Trump's proposal to put tariffs on another 300 billion U.S. dollars in Chinese goods.

Imposing additional tariffs will not solve any problems, whoever starting the trade war will hurt himself as well as others, Geng said.

China has become one of the most popular investment destinations for global companies for years in a row since it launched the reform and opening-up drive 40 years ago, he said, adding that companies will choose which countries to invest in or which partners to cooperate with based on their interests and market rules.

"China welcomes foreign companies to increase investment in the country, and we will continue our efforts to create a more stable, fair, transparent and predictable business environment for foreign investors," he said.

China will continue to expand market access, increase imports of goods and service and attach importance to the implementation of opening-up policies, Geng said.