China willing to strengthen cooperation with NATO based on equality, mutual respect: FM 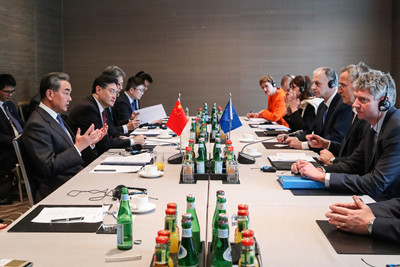 Photo via website of China's Ministry of Foreign Affairs

Wang made the remarks during a meeting with NATO Secretary General Jens Stoltenberg on the sidelines of the 56th Munich Security Conference.

Noting that the Chinese nation advocates peace in its cultural genes, Wang said that China is following a different path from that of previous major countries, that is, pursuing its own peaceful development and also win-win cooperation with the rest of the world.

China follows a national defense policy that is defensive in nature, and its per-capita defense expenditure is far lower than that of other major countries, Wang said, adding that in response to the new international security situation, China has also proposed a new concept of common, comprehensive, cooperative and sustainable security.

These are positive contributions made by China to world peace, he said, adding that the country will continue to resolutely follow the right path of peace and cooperation.

China and NATO members do not have geopolitical conflicts and competition, and different views on some issues should not be the obstacle for exchanges and cooperation between the two sides, Wang said.

Wang voiced hope that NATO will continue to foster a correct view of China and regard China as a friend and partner.

In the past decades, China has achieved rapid development and brought great benefits to the world, said Stoltenberg, adding that NATO does not see China as an adversary, but stands ready to strengthen relations with China.

NATO has always advocated a rule-based international order and is willing to strengthen dialogue with China in this regard, he added.

NATO is willing to cooperate with China on such issues as Afghanistan, the Middle East, Iraq, and arms control, he said, expressing his belief that NATO will benefit a lot from its cooperation with China and that the two sides can make joint contributions to maintaining world peace and security.

Stoltenberg also expressed sympathy and support for those affected by the novel coronavirus outbreak, saying that the Chinese government and people have made great efforts to combat the epidemic, and he is confident that China will defeat the epidemic at an early date.

For his part, Wang updated Stoltenberg on the latest development in China's anti-virus fight.