CHINA China willing to use rare earths to meet development needs of all countries: Foreign Ministry

China willing to use rare earths to meet development needs of all countries: Foreign Ministry 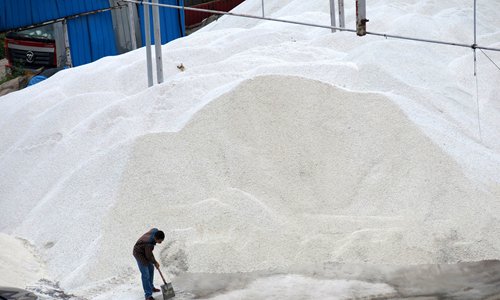 A worker unloads rare earths along the Yangtze River's banks in Southwest China's Chongqing Municipality on May 9. （Photo: IC）

China is willing to use its rare-earth resources and products to meet the development needs of all countries, so that the country could play an active role in facilitating it own economic development as well as that of the rest of the world, Chinese Foreign Ministry spokesperson Geng Shuang said at a press briefing on Thursday.
The comment came ahead of an annual trilateral discussion on critical resources including rare earths, which is scheduled to take place in Brussels on November 19. Diplomats and industry representatives from the EU, Japan and the US will participate.
Some insiders said this year's meeting will focus on how to curb China's role in shipping on the minerals, as China's mines account for about 70 percent of global output.
"China has the world's largest reserves of rare earths and is also the world's largest producer. Being at an important position on the global industrial chain, China has always upheld the principles of 'open, coordination and sharing' to promote the growth of the rare-earth industry at home," Geng said.
Geng's response came against the backdrop of mixed signals from recent China-US trade talks, during which both sides seem to hold different view on whether the removal of tariffs should be included in a much-anticipated phase-one deal. Some industry observers interpreted the response as a goodwill gesture from China that the country would not use rare-earth minerals as a bargaining chip during the negotiation stage unless trade talks broke down.
Rare earths are an indispensable component in electronic products, chips and military equipment. Curbing exports of the minerals could inflict massive damage on the US military and technology industry.
From 2014 to 2017, the US sourced 80 percent of its rare-earth imports from China, according to US government statistics.
In October, China's exports of rare earths surged by 17.4 percent, industry data showed.