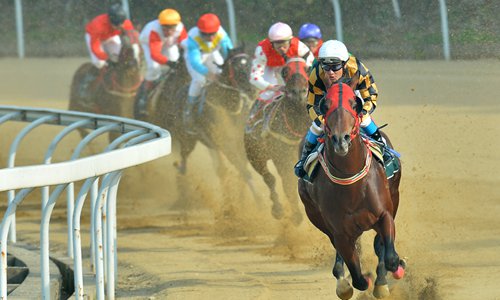 China is not backtracking on promoting horse-racing and sports lottery in South China's Hainan Province. As potential key sectors to boost tourism and retail spending on the island, all such future activities will be guided by the government, industry representatives said. The National Development and Reform Commission (NDRC), the country's top economic planner, unveiled new guidelines on Friday to boost the establishment of a global shopping and tourism center in Hainan, as the country's newest pilot free trade zone. The island is urged to diversify tourism products in areas such as cruise travel and horse racing, and is also encouraged to explore the sports lottery business. By 2020, the island will see significant progress in building the global tourism center, the NDRC said in a document published on its website. The commission is expected to come up with more attractive tourism measures such as expanding the scope of tax-free policies, granting 15-day visa-free entry to foreign cruise ship travelers, and accelerating the establishment of a national sports training base in the southern area. Hainan's easing access to horse racing and sports lottery has sparked heated online discussion in the past year, as some speculate on whether the island will eventually allow casino gaming or Hong Kong-style horse racing, which would be the first of its kind in the Chinese mainland. However, encouraging horse racing as a form of sports lottery does not mean gambling will be legalized on the island, industry insiders stressed."The latest announcement has reinforced confidence in the development of horse-racing in Hainan. The industry has hit a bumpy road this year as it was hyped by investors and media," Liang Long, chairman of the Hainan Equestrian Club for Teenagers, told the Global Times on Friday.The local horse-racing industry had been growing very slowly in recent years due to the lack of equipment and regulation procedures, he noted. "However, as soon as the central government sent a clear signal to boost this new industry, some investors and companies began speculating on it, which had led development astray from its desired course," he said. No gamblingLiu Cigui, Party chief of the province, assured the public in October that it would not be allowed to have gambling or betting on horse races. "Some online discussions suggested opening up casinos, setting up gambling, and easing restrictions on horse racing... all such talk deviates from the national conditions and reality, and should be resolutely not allowed," Liu was quoted as saying in a report by the local newspaper Hainan Daily.Bloomberg reported in February that China was considering allowing a lottery in Hainan or sports betting, which will further lead to opening the door for casinos.The tropical island will not allow any form of gambling or any policy loopholes in this sector, which is not in line with the central government's free-trade zone plan, Wei Xiang, a research fellow of the National Academy of Economic Strategy under the Chinese Academy of Social Sciences, told the Global Times on Friday."There will be no grey area for undertaking sports lottery projects in Hainan, and local authorities will consider more competitive sports that will attract public attention rather than gain profits," he said. Under the country's current lottery management rules, money from lottery ticket sales covers administrative fees, public welfare projects and prize money, according to the Xinhua News Agency. Local horse-racing industry representatives also expect that horse-racing and sports lottery will be well guided by the government in the future to ensure the proper use of the fund. "Progressively, sports lottery will not play a significant role in fundraising in the future, as it will be deemed as part of the government's welfare management," Wei said, noting that the emerging horse-racing industry in Hainan will be fundamentally different from the one in Hong Kong.