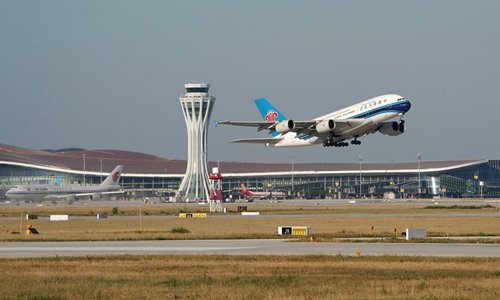 Major Chinese airlines on Wednesday decided to cancel direct flights to Iran or re-route other flights to avoid the airspaces of Iran and Iraq, citing security concerns after Iran's missile strike at US bases in Iraq.

China Southern Airlines canceled a flight between Urumqi, capital of Northwest China's Xinjiang Uygur Autonomous Region, and Tehran, a source close to the matter told the Global Times on Wednesday.

The flight had been scheduled to depart at 8:35 pm on Wednesday and arrive at Tehran Imam Khomeini International Airport at 9:15 pm Wednesday local time.

The decision was made for security "reasons," said the source, who spoke on condition of anonymity. The source added that no decision has been made about canceling flights for the rest of the week. The airline flies between Urumqi and Tehran four times a week.

China Eastern Airlines also had to re-route flights to avoid the airspaces of Iran and Iraq, a source in the company told the Global Times on Wednesday. The source said that China Eastern does not operate direct flights to Iran but it has one or two flights into Dubai each day.

Another major Chinese airline also decided to avoid airspaces of Iran and Iraq, another source told the Global Times. But the source said that the airline does not have many flights serving the Middle East.

The decisions from Chinese airlines followed a chaotic day in Iran, where a Boeing 737 jet operated by Ukraine International Airlines crashed near the Imam Khomeini International Airport on Wednesday. All 176 people on board were killed and investigations into the crash are still underway, according to media reports.

There was no report of Chinese nationals on the flight, Geng Shuang, a spokesperson for the Chinese Ministry of Foreign Affairs, said on Wednesday.

Early on Wednesday local time, Iran launched more than a dozen ballistic missiles at two US military bases in Iraq in retaliation for the US' killing of a top Iranian military commander Qassem Soleimani last week, media reports said.

Tensions are still running high as Iranian and US officials continue to exchange threats.