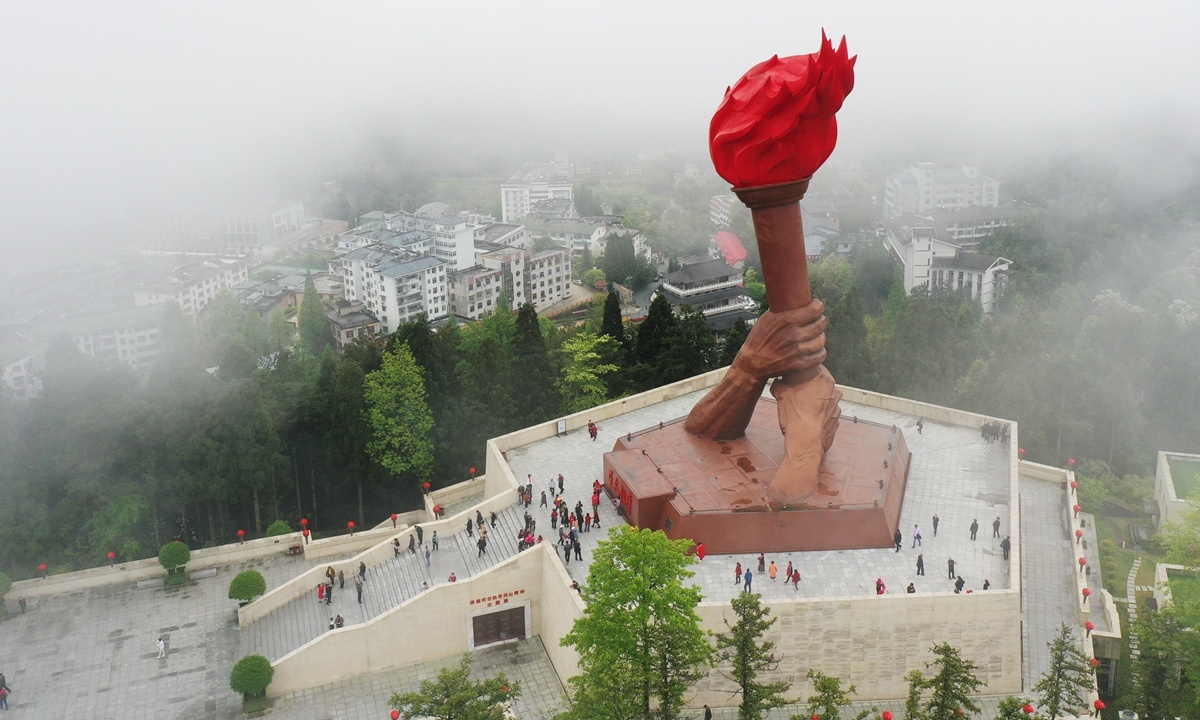 "Red tourism" which refers traveling to historical sites with a modern revolutionary legacy, is gaining in popularity for domestic tourists. Seeing growing demand, Chinese airlines are making their efforts to launch more services to cater to a new market opportunity.

This year marks the 100th anniversary of the Communist Party of China (CPC).

During the flight, flight attendant asked the passengers about the questions such as "where is the most famous landmark in Yan'an," passengers reportedly rushed to answer the questions.

On Saturday, Shanghai Airlines under China Eastern ran a similar game on a route from Shanghai to Jinggangshan, East China's Jiangxi Province.

Famous for its historic ties to the Party, Jiangxi is known as the cradle of the Chinese revolution and the Red Army - the predecessor of the People's Liberation Army - as well as the birthplace of the Chinese workers' movement.

Chengdu Airlines on May 11 had a maiden flight from Chengdu, Southwest China's Sichuan Province to Zunyi, the city known as the home of the Zunyi Meeting held by the Chinese Red Army, with a transit at Jinggangshan.

Passenger interaction is just one example of airlines' efforts to promote red tourism. Amid the robust recovery of the domestic tourism market following the effective containment of the COVID-19 epidemic in China, "red tourism" stands out.

Throughout this year, Hainan Airlines said that they will fly about 190 red tourism routes, covering the main revolutionary areas of the country, with an average daily flight volume of about 300 flights, and an average daily transportation of nearly 30,000 passengers.

China Southern Airlines announced that it will launch customized red tour service. At present, the airline has launched a number of "red tourism" routes such as 3-day tour from Shanghai to Jiaxing.

China's Civil Aviation Administration and Ministry of Culture and Tourism said in recently published guidelines that they will propose to accelerate the construction of airports in the "red tourism" areas, and support airlines to increase capacity, open more routes, and increase flights at airports in red tourism regions

Ministry of Culture and Tourism said the number of red tourism tourists in China in 2020 will exceed 100 million. In the 13th Five-Year Plan (2016-20), the number of "red tourism" tourists maintained a steady growth, holding a market share of more than 11 percent in the national domestic tourism market.

According to a report recently released by online travel booking platform Trip.com Group and Xinhua ¬Finance, during the May Day holidays, online searches for "red tourism" surged about sevenfold from last month and red tourism orders placed on Trip.com rose 375 percent compared with the same period in 2019.