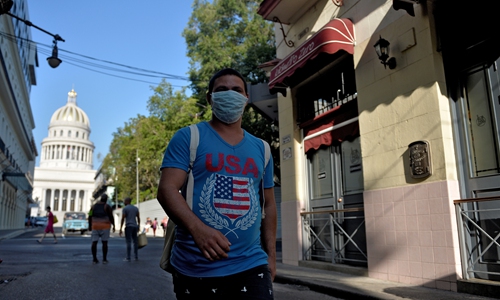 A man wears a face mask in Havana, Cuba on Tuesday. (Photo: AFP)

Chinese who once studied in Cuba are organizing donations and purchasing epidemic prevention supplies for Cuba. Although concerned about the transportation restrictions because of US sanctions against Cuba, they are determined to overcome all difficulties and hope to help the Cuban people.

"Cuba is my second hometown. It is chronically short of supplies because of the sanctions of the US. Since COVID-19 was declared as a pandemic, our classmates are all worried about Cuba, hoping to contribute to its epidemic prevention," Chen Ke, the initiator of the donation campaign, told the Global Times on Sunday.

Donation for the second hometown

Chen Ke, a 30-year-old Chinese man from Southwest China's Guizhou Province, contacted the Cuban embassy in China and organized the donation. He spent five years learning Spanish in Havana since 2009 and returned to China after graduating.

The Cuban government funded students from poor provinces in central and western China to learn Spanish and medical science and other subjects in Cuba. This scholarship program has benefited around 3,000 Chinese students since 2006. Chen Ke was one of them.

Cuba is an island state and has been under US sanctions for years, and Chinese who had studied there are concerned that shortages would affect Cuba's fight against COVID-19.

Chen Maolin, a 21-year-old Chinese student majoring in accounting at the University of Havana, told the Global Times that masks are hard to buy in Cuba, where many locals make their own using sheets and blankets.

Chen Ke admitted that Cuba leads the world in medical care. However, to fight this pandemic, adequate epidemic prevention supplies are of vital importance. That's why he organized the donation.

Since March 28, a total of 129,000 yuan ($18,193) has been raised, with around 220 Chinese participating. More than 80 percent of the donors are graduates once granted Cuban scholarships. "We are grateful to Cuba for funding our education, and we hope to give back to this generous country," Chen Ke said.

In discussions with the Cuban Embassy in China, he and other donors are finding qualified factories to purchase protective outfits and masks from the donated money. They pay attention to the quality of medical supplies and the embassy gave them a list of recommended factories.

On April 1, the Embassy announced on its public account on China's Twitter-like Sina Weibo that the medical supplies donated by the Jack Ma Foundation cannot reach Cuba because of US sanctions.

"We are so worried about transportation restrictions, and the Cuban Embassy in China is helping us, which makes me a little more comfortable. However, US sanctions are complicated. Even if there is only a glimmer of hope, we will make an effort to give the masks to the Cuban people," Chen Ke said.

The Cuban people are very warm and friendly. We did not experience any discrimination in Cuba, even though many Chinese students were discriminated abroad at the beginning of the epidemic, Chen Maolin said.

"I'm a little worried about the epidemic leading to the lack of basic supplies." Chen Maolin went to the supermarket to buy toilet paper and detergent. The school is closed and he is isolated at home.

He said he appreciates the Chinese Embassy in Cuba for sending two bars of antibacterial soap, a bottle of disinfectant and a mask to Chinese students in Cuba, and said that masks might be sent again in the future. When I come across difficulties, I first turn to the Chinese embassy, he said.

Xie, a 24-year-old Chinese student learning Spanish at the University of Havana, told the Global Times that he is concerned that the shortage of medical supplies will impede Cuba from fighting the epidemic.

"All my masks were brought by friends from China and neighboring countries. Masks are not readily available in Havana. I feel sorry to see the local people make their own masks with bedsheets, and I admire the Chinese people organizing the donation to Cuba," Xie said.

Xie's Cuban friend who majors in medical science asked Xie to trust Cuba's level of medical research. Cuba has succeeded in fighting the Zika virus and is also capable of preventing and controlling the COVID-19, his friend said.

The Cuban government has implemented a series of measures to prevent the spread of the epidemic.

The Xinhua News Agency reported that Cuba started temporarily restricting the entry of foreigners on March 24 for 30 days, and only Cuban citizens and foreigners holding residence permits can enter Cuba. Foreign visitors who have not left Cuba before March 24 must be quarantined at their hotels until they leave.

On that day, all schools were also closed for four weeks, inter-provincial traffic was suspended, and Cuban citizens were not allowed to leave the country without special circumstances. The government also advised people to reduce unnecessary travel and maintain a social distance, as reported.

Xie decided to stay in Cuba during the epidemic and followed the quarantine policies of its government. "Returning to China requires stopping by several countries, which increases the risk of infection. I'll be protected, stocked up on supplies and quarantined in my quarters, expecting Cuba to defeat the outbreak," Xie said.

The island country also distributed the anti-viral drug Interferon Alfa-2B, which has proven to be effective in treating COVID-19 in China.  More than 45 nations have requested Cuba to send the drug to them, Cuba-based national media Granma reported.

The island nation is sending medical teams around the globe to help with the coronavirus response. In 2019, more than 28,000 Cuban healthcare professionals were working abroad. And before the COVID-19 outbreak, 59 countries were benefiting from Cuba's medical internationalism, media reported.

There are 288 confirmed cases in Cuba, with six deaths as of press time.