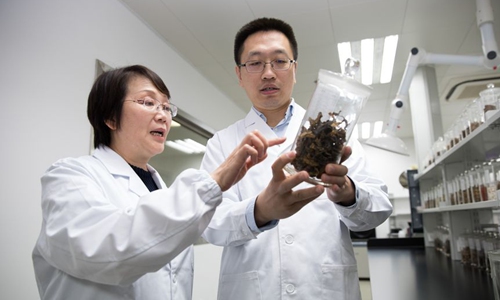 Geng Meiyu (L), key inventor of the drug GV-971, also a researcher of Shanghai Institute of Materia Medica under Chinese Academy of Sciences, discusses the research progress with her colleague at the Green Valley institute in Shanghai, East China, November 3, 2019.  (Photo: Xinhua)

An innovative Chinese Alzheimer's drug that hit the domestic market last week will go through clinical trials on 2,000 patients overseas in 2020.

The orally administered drug GV-971 will be tested in 200 clinical centers in North America, the European Union, Eastern Europe, Asia Pacific and other places, according to Green Valley Pharmaceutical one of the drug's co-developers.

The company said it plans to complete the global clinical trials in 2024 and submit the New Drug Application to the U.S. Food and Drug Administration and European Medicines Agency in 2025.

GV-971 was jointly developed by the Shanghai Institute of Materia Medica under the Chinese Academy of Sciences (CAS), Ocean University of China and Green Valley, after a 22-year study.

The results of the mechanism of action study were published in the international journal Cell Research in September 2019, saying that the drug, extracted from brown algae, works by modifying gut bacteria to ultimately reduce brain inflammation in mice that were genetically engineered to have the disease.

It was approved to market last November by China's National Medical Products Administration, which said the GV-971 "can improve cognition in patients with mild to moderate Alzheimer's disease (AD)."

According to researchers, apart from animal experiments, more than 1,100 Chinese AD patients participated in clinical trials before the drug hit the market. In the last test, a total of 818 participants from 34 leading hospitals in China took 450 mg GV-971 orally twice a day for a treatment period of nine months, which proved safe and effective in improving cognition.

"Because of its effectiveness on Chinese patients, we expect this drug to benefit more people in the rest of the world," said Lyu Songtao, chairman of the Shanghai-based pharmaceutical company.

At least 50 million people worldwide have dementia and AD is the root cause behind 60 percent to 70 percent of the cases, according to the World Health Organization.

AD is an irreversible, progressive brain disorder that slowly destroys memory, thinking skills and the ability to carry out simple tasks.

China currently has about 10 million AD patients and the number is expected to increase to 40 million by 2050, more than the population of Canada, according to China Association of Gerontology and Geriatrics.

The aging population and high medical costs are urgent tasks the country is facing. For Chinese AD patients, the average spending can reach 130,000 yuan (about 18,665 U.S. dollars) per year.