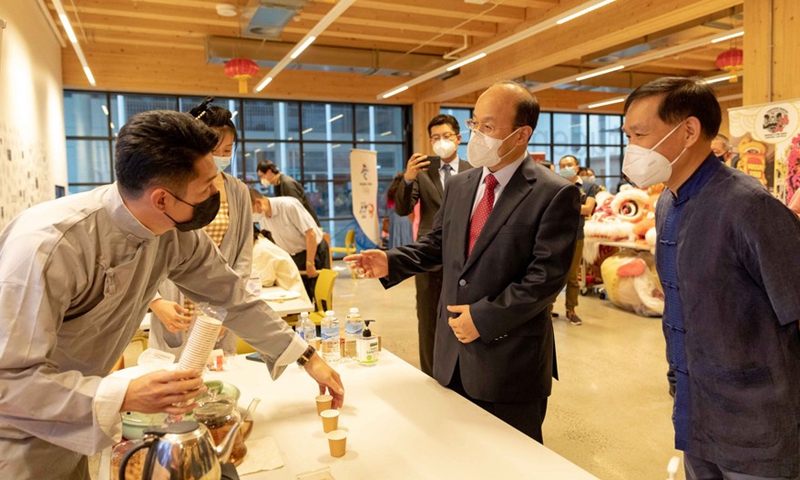 As China-Australia ties is at a critical juncture after the new Australian government took office, Chinese Ambassador to Australia Xiao Qian said in a speech on Wednesday that the decision to reset bilateral ties should be made "free from interference from a third party."

During his 90-minute speech delivered at the National Press Club in Canberra on Wednesday, Xiao said the relationship between China and Australia has been caught in difficult situation due to reasons known to all, Australian media ABC News reported in live coverage of the speech. "This has greatly impacted the bilateral exchange cooperation and severely damaged the friendship between our two peoples. This is something we didn't want to see," Xiao said.

However, now with the new Australian government, it has provided both with an opportunity to "reset the relationship," Xiao noted, evidenced by some encouraging positive progress, albeit there is still a lot of work to be done. The ambassador meanwhile stressed that China's policy of friendship and cooperation to Australia remains unchanged, according to the live update.

"When we cooperate, we both win. When we don't, we both lose," the ambassador said.

He added that China has no intention to interfere in or undermine Australia's relations with a third party. "At the same time, it is our belief that China and Australia should make independent judgments and decisions to develop our own bilateral relations based on interests of the two people, free from interference from a third party."

The Chinese ambassador choosing such a time to address the Australian masses has multiple implications, and above all it is to make China's stance clear on amending bilateral ties, that the premise of all is that Australia should make independent foreign policy in light of its own interests, rather than following other's orders, Yu Lei, chief research fellow at the center for Pacific Island countries at Liaocheng University in East China's Shandong Province, told the Global Times on Wednesday.

While Beijing is showing sincerity and good will in patching things up, Australia, on the contrary, joined the US and Japan in the unwarranted accusations against Beijing's military drills around the Taiwan island following US House Speaker Nancy Pelosi's Taiwan visit, a move that Xiao said is in total disregard of China's strong opposition, "making it clear to the world it was the US side who first took provocative action to change and undermine the status quo."

Acting Prime Minister and Defense Minister of Australia Richard Marles warned of the heightened risks of Chinese military drills and the potential for miscalculation on Wednesday, local media reports said.

Marles also said Beijing's military buildup was of "enormous" concern and has shaped the strategic circumstances of the region, claiming Australia's defense force must be "as potent as possible," VOA reported on Tuesday.

Yu pointed out that Marles' view suggests the new government has no real intention of improving China-Australia relations, and it is still keeping in line with the tone of the US - that containing China remains the main axis of the Western narrative. However, Australia's economy is heavily dependent on foreign markets, especially the Chinese market. In order to recover the domestic economy and gain voter support, the new government is particularly keen to restore the Chinese market. "Therefore, China should not rush to resume normal economic and trade cooperation, but lay a solid foundation for the long-term improvement of bilateral ties," Yu said.

It also echoed Xiao's remarks on Wednesday, that Australia is the ringleader, not a victim, of the deterioration of bilateral relations, and now the restoration of commerce and trade depends on what actions have Australian government taken and how much sincerity it has shown, the expert said.

Observers urged Canberra to refrain from stepping, once and again, on China's red lines if it wants to restore ties with Beijing - the one-China principle, which is the fundamental premise of the development of any diplomatic relations with China.