CHINA Chinese ambassador dismisses US accusations against China as 'groundless'

Chinese ambassador dismisses US accusations against China as 'groundless' 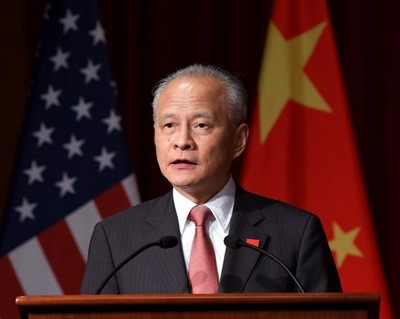 Cui made the remarks in an interview with Fox News Sunday which was aired on Sunday.

Commenting on US Vice President Mike Pence's tough words on China, Cui said "all these accusations are groundless."

"One of the fundamental principles in China's foreign policy is non- interference in the internal affairs of other countries. And we have been consistent in this position. We have a very good track record," Cui said.

The ambassador noted that Chinese media were just learning from American media, buying commercial pages from newspapers to make their views known, or to cover what is happening here. "This is normal practice for all the media," he said.

Referring to the ongoing trade disputes between the two sides, Cui said China does not want to have any trade war with any other countries, including the United States.

"But if somebody started a trade war against us, we have to respond and defend our own interests," the Chinese envoy said. "So this is tariffs for tariffs. It's for nothing else," he said.

China and the United States, as the two largest economies in the world, have the responsibility to make sure that they have a positive and constructive relationship, said Cui.

"That will enhance people's confidence in the prospects of the global economy," he said.

Referring to accusations that China steals intellectual property and forces technology transfers from US companies that invest in China to Chinese companies, Cui said those accusations about how China has developed are groundless and not fair to the Chinese people.

"It would be hard to imagine that one fifth of the global population could develop and prosper, not by relying mainly on their own efforts, but by stealing or forcing some transfer of technology from others. That's impossible," he said. "The Chinese people are as hard-working and diligent as anybody on earth."

Responding to the question on US arms sales to Taiwan, Cui said "this is a very good example of American intervention into Chinese internal affairs."

On the expected meeting between the leaders of the two countries in Buenos Aires at the G20 Summit next month, Cui said it was so clear that such top-level communication plays a key and irreplaceable role in guiding the relationship forward.

"There's a good mutual understanding and good working relationship between the two (leaders), I hope and I'm sure this will continue," the ambassador added.

"That's why we welcome and support the summit in Singapore" between US President Donald Trump and Kim Jong Un, top leader of the Democratic People's Republic of Korea, and "we very much look forward to their second meeting," Cui said.

"I think in order to achieve the goals, we have to have coordinated, phased and step-by-step approach," the ambassador noted.