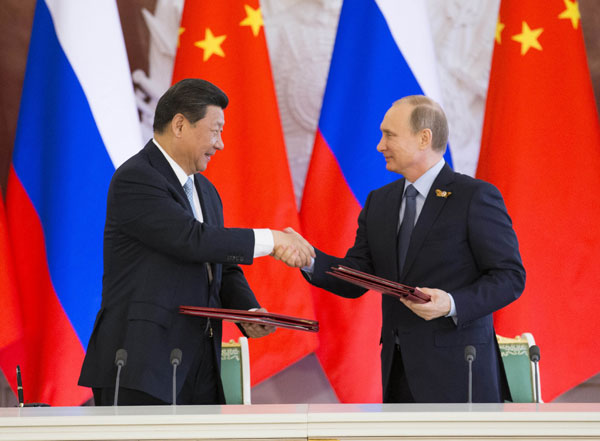 The China-Russia comprehensive strategic partnership of coordination has brought new opportunities for bilateral cooperation and will see wider and deeper development in the future, the Chinese ambassador said here Wednesday.

"As China-Russia relations continue to witness high-level development, trade cooperation has been accelerated and upgraded," Li Hui told a joint interview with Chinese and Russian media.

China has been Russia's largest trade partner for eight consecutive years, with bilateral trade up by 20.8 percent to 84 billion US dollars last year. As the trade volume reached 31.2 billion dollars in the first four months this year, it is expected to exceed 100 billion dollars for the whole year.

Li noted that a batch of major strategic projects between the countries have achieved big progress. In the energy sector, the first stage of the Yamal liquefied natural gas (LNG) plant has come into operation, and a number of nuclear projects including Unit 7 and 8 of the Tianwan nuclear power plant are about to start operation.

Speaking on the sidelines of the fifth China-Russia Expo, Li hailed the prospects of the annual event.

"The China-Russia Expo ... has become an important platform for implementing top-level design by the leadership of the two countries, promoting comprehensive and pragmatic cooperation, as well as conducting effective coordination of their development strategies," Li said.

The expo kicked off Tuesday in Russia's fourth largest city of Yekaterinburg. Themed "New beginning, new opportunities and new future," the annual event has attracted over 200 Russian and Chinese companies this year.

"The expo ... is dedicated to providing more platforms for exchanges and cooperation for the companies, as well as facilitating deep inter-regional and inter-industrial integration of the two countries," Li said.

In particular, he highlighted regional cooperation thriving in recent years, which has "added new impetus" to the development of the China-Russia comprehensive strategic partnership of coordination.

According to Li, China and Russia have established the "Yangtze River-Volga River" and "China's Northeast-Russia's Far East" regional cooperation mechanisms and signed agreements for 137 pairs of sister cities and provinces/regions.

The ambassador suggested the two countries continue to strengthen policy coordination, improve inter-regional connectivity and facilitate people-to-people exchanges, so as to further tap the potential of their regional cooperation.

"With the joint promotion of the two governments and unremitting efforts of enterprises of the two countries, I believe China-Russia cooperation will certainly reach a new level," Li said.